He could have been left at Bhujerba. Was there not an underground resistance there, ripe for the picking? Perhaps a few rebels from the tavern hideout, or even a Bangaa sellsword? The license board serves all the same, and anyone would’ve proven more sensible than a child to bring on a quest to restore a kingdom and challenge an empire. But there he is: Vaan “just along for the ride” Ratsbane, the street urchin from Rabanastre! There to prove his central position on the box art of Final Fantasy XII. A main character if there ever was one.

If the argument ends there it is indeed a pitiful one to justify Vaan, the brushed aside boy and begrudged background noise, as any kind of lead. Criticism of him holds more water still if people subscribe to the idea that Vaan was a kind of last minute replacement of the ‘true hero’ of Final Fantasy XII, Basch. Yet this is overstated. In actuality, it’s a banal point that director Hiroshi Minagawa mentions in a 2007 interview with a French fansite. The change did happen, but Minagawa clarifies that such decisions are par for the course in game development, and that “there [were] not huge changes in what we had planned to do.” No where else is there indication that Vaan was a botched rush job, or one that had any relation to the departure of the beloved original director, Yasumi Matsuno.

All there is to go on is that Vaan was indeed favored above older male leads. Minagawa admits this since the team saw little success with the “beefy” and “prime of age” Ashley Riot in Vagrant Story, back on the Playstation in 2000. Again, I don’t find such a decision offensive or startling when a development team is focused on creating a well received product. This is all fairly usual. 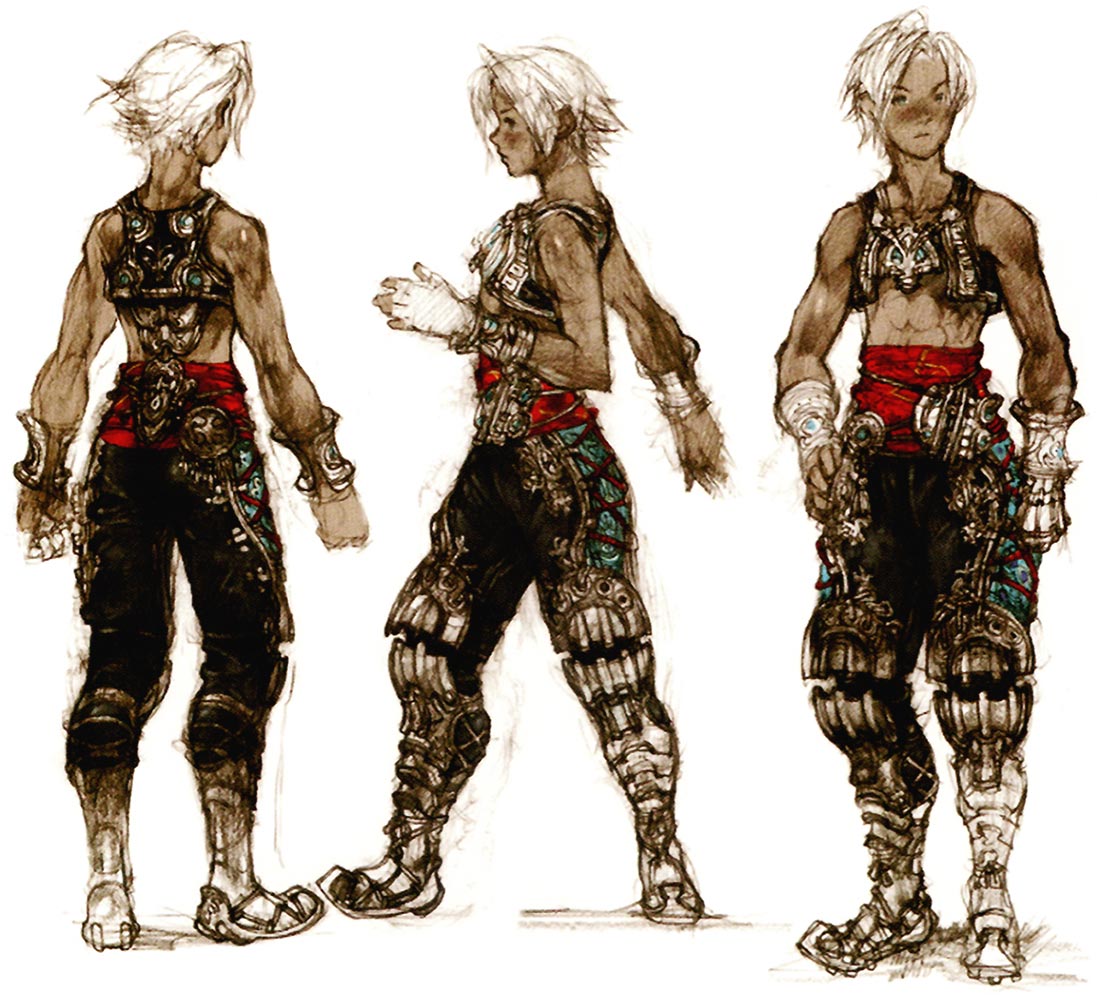 In fact, the original design of Final Fantasy XII’s main character was a burly fellow who used a snowboard as a weapon, if Akihiko Yoshida (lead artist) is to be believed in his 2003 interview with 1UP. Further exampling the regular nature of change in game development, Vaan was meant to be rather effeminate in behavior when initially introduced. But the Japanese voice actor and motion capture artist, Kohei Takada, ended up giving an energetic and boyish performance, and that stuck instead. Creative work is malleable. Ideas are tossed around, thrown out, and better paths taken. It’s impossible to say what branch a team should have cut or gone down, let alone prove Vaan as a cement example of corporate meddling in game publishing. Let it go, or instead champion in equal fervor for the return of Yoshida’s snowboard wielding yeti. I just might join in.

But beyond rumors and set-in-stone ideas of how a leading role must operate, Vaan serves a more logical purpose to Final Fantasy XII’s themes and is too well ingrained to be anything like a sudden switcharoo. He is not a chief protagonist, but a point of view character and symbol who, if forgotten, spells tragedy for the true decision makers and leaders in the story. This case for Vaan can be made, and while it may not redeem him entirely, it jumps enough hurdles to reach a fairer assessment of the boy and his presence, while avoiding the nonsense above.

His actual role — for both storyboard and interaction — is obvious and hardly takes much analysis. Vaan is merely the player’s perspective, in this case a commoner who’s lost his brother and nation to an empire’s subjugation. An avatar to walk the streets of sky cities and pirate coves, a point of view to ask questions on the behalf of player curiosity. In one instance of the game, for example, upon entering the city of Archades, Vaan remarks on how the sewer smell isn’t what one would expect from a grand capital. The closed but covetous relationship between the lower slums and the revered metropolis above is explained by a grown up, Balthier, and so follows a gameplay segment where the player must work the slum streets to find entry papers to the upper level. Vaan shows good function and Final Fantasy XII, as it turns out, isn’t half bad for it.

But Vaan isn’t likeable as a person, and this initial bias is admittedly hard to surmount. But that he is a teenager and written to act like one should be a compliment, even if backhanded. That I hate him on a personal level is a testament to his natural immaturity. A brat he may be, but brats may have purpose and deserve a chance to express it, whether it be found in their good questions or how they move larger narratives. His bout of thievery in Rabanastre’s royal palace is the reason Final Fantasy XII’s story kicks off, so again, his intentions as a device are respectable. And I’ll take a real adolescent over an innocent lump of “gee golly mister!” or, oppositely, one too mature to be believable. Vaan, while not entirely realistic, at least has the decency to be insufferable.

A good omen for a character like this is that his stupidity is recognized by others. Me and the adults of the party are on the same page on this. No one respects Vaan in Final Fantasy XII. Escaping the Nalbina dungeons, Balthier sooner enlists the aid of an imprisoned king slayer than heed any part of Vaan’s emotions. The rebel princess Ashelia, on more than a few occasions, commands the boy thief, rather bluntly, to stop speaking the moment he opens his dumb mouth. Vaan’s attempts at expressing his thoughts meet further dismissal and awkwardness, such as when he asks a Viera her age, or interrupts a sacred silence in front of the Gran Kiltias at Mt. Bur Omisace. Final Fantasy XII is much aware of its primary adolescent, his age, and behavior.

Vaan and Penelo rush ahead of the adults to play along the shore of the Phon Coast.

This emphasis can’t considered unintentional. Even the way cutscenes are ‘shot’ in Final Fantasy XII reinforce this. Vaan, Penelo, and little lord Larsa are often depicted in the background while adults converse in the foreground. The kids play, laugh, and race each other, otherwise acting their age while royalty, rebels, and risk takers decide the fate of the world. Vaan isn’t meant to take the reigns from anyone, rather, he acts as a living reminder for what’s at stake. Already orphaned by plague and war, his future now lies in the hands of Ashe and company. It’s an abstract but obvious “think of the children!” motivator, reaching its peak at the game’s climax.

This takes place atop the tower of Pharos at Ridorana, where Gabranth, betrayer and murderer of Dalmascan royalty, appears suddenly to abet the party’s rancor. Marching toward them in a rage, he intends to turn Ashe to a path of total war. Vaan’s time has come, at this moment, to sagely express that revenge is pointless. Ashe, in turn, not only listens but perhaps finally recognizes the youth as the generation of innocence that would suffer in her wake if she chose Nethicite Armageddon. It’s a solid attempt and its meaning needs no further explanation, but now I must be careful and re-clarify my standing.

Though Vaan makes clear his purpose and operates Final Fantasy XII in respectable facets as a POV character, catalyst for gameplay scenarios, and knowledge drinker in a captivating world, he still manages to feel forced and unwelcome, and in this scene especially. It’s the grand payoff of the entire story, after all, and it suffers greatly from this forced scenario writing, where a sideline character, Vaan, is strangely allowed to step into focus and steal away otherwise powerful moments. Looking again at this scene with Gabranth, it serves as an example of what makes Vaan dreadful, more so than it does justify him as meaningful.

The mistake stems from Vaan’s lazily drawn up inner dilemma. His brother, Reks, died in the war, and thus Vaan acts a fool in the streets of Rabanastre as a thief and daydreams of flying airships. How those two clauses connect emotionally, I do not know, nor does it garner any empathy as the boy appears healthy and happy despite it. Worse still, he overcomes the whole ordeal before it has a chance to evolve.  “I’m through running,” he dramatically pledges to Ashe on the Giza plains, who seems almost shell shocked that they’re even talking on a personal level. Now he’s looking for “answers” which are equally vague and undefined. Who is this kid? And why, later, is he standing center stage as Gabranth makes his ferocious entrance as villain? The intensity of this scene is shattered in a thunderclap of corn the moment Vaan shouts, “…And Reks!!!” A point that falls on deaf ears and earns no response because it holds no value to anyone in the room, me holding my Dualshock included.

This is abrupt input to justify a character’s existence, and if you watch the clip it continues (first at 2:30, and again at 6:15). It’s a tie-in that Vaan as a concept demands, and it’s implemented so awkwardly that even Gabranth gives an audible grunt of confusion from underneath his steel helmet. Who are you? The scene, like others with Vaan, is so uncomfortable I had almost anticipated a fictional film director to cut the scene, slap him quiet, and redo Ashe’s makeup. A whole tower dungeon of mob clearing and boss defeating, for this? It’s insulting to the game.

Now back to Bhujerba, if you will. This is where all trouble starts because it’s when Vaan’s presence ceases to make sense in Final Fantasy XII. The party has in their possession the relic that Vaan originally stole, and Basch, Ashe, and the sky pirates all have their motivations in check. Penelo, too, has been rescued and nothing is owed. The children are not needed. And yet, somehow, both are allowed to throw a mini tantrum, glue their bottoms to the seats of Balthier’s personal airship, and be passively accepted for no reason other than “to see this through.” It is sheer laziness on part of the writers, and Vaan suffers from this moment onward because of it. Now, anytime he speaks, the player might feel prompted to ask, “why are you even here?” Indeed, perhaps a case for Vaan is ultimately a case to more accurately hate him.

Leave him at Bhujerba, I say. Better yet, have him kidnapped and never to be seen again. An excellent opportunity for this is during the “I’m Captain Basch fon Rosenburg of Dalmasca!” notoriety drill. Just have the kid scream and make a ruckus, and then be promptly snatched into darkness by a few vagabonds. Revert control to Balthier and be on with it. But keep Penelo. She would serve the same purpose of backstage innocence as Vaan and without the interruptions. She can ask questions and explore towns all the same, too. Smart girl, that one.