Is an arrow through the heart cause for concern? Videogames would require clarification on that question. Anywhere else the situation is worrisome. In real life it’s a trip to the ER. In most fictitious books and films, too, it’s considered equally fatal. Even Boromir eventually realized this, proud as he was. Games, however, take great liberties in what a ruptured organ means to the player. Can I crouch until the blotches of red leave the screen? Am I about to respawn the next second in a multiplayer FPS? What are my hit points at? Do I have enough funds to produce another soldier at the barracks? In RPGs, most of all, the question must be: “Am I in a cutscene or am I in battle?”

Indeed, when a video game character takes an arrow through the heart, context matters. It decides whether you are allowed to simply toss a restorative potion, conjure a healing spell, or even resurrect from a convenient ‘KO’ status. It doesn’t matter how many bullets, knives, firestorms or arrows are taken to the heart, head, or elsewhere. All of that is fair play during play. But during watch, that is, dedicated narrative scenes, arrows suddenly do irreversible damage and are the cause of tears, anger, and tragedy.

The cheap opportunity to snicker and mock this peculiarity is always there. A thousand hacky propositions of “why didn’t they toss a [insert game’s restorative item] on [insert dead character], hurr hurr.” Mostly I’m referencing to Final Fantasy VII, and yes, I get it. It’s such a clever observation that videogames contain dynamic rule sets which often make for conflicting scenarios! Such as the classic case of reducing a boss to zero HP in a barrage of violence only to see him take a knee and be short of breath in the ensuing cutscene after. He usually promises revenge and teleports off.

Rules change in RPGs like this at the drop of a hat. Whether that’s as extreme as a battle screen versus a cutscene, or simply opening a pause menu to sort through inventory in the midst of combat, what you are permitted to get away with depends on the immediate context. Games are made to be interacted with and come with flexible rules to accommodate that interaction. It’s not a clean business when you throw in traditional film storytelling alongside it all, but I rarely mind it. Developers typically establish the difference and it becomes a mutual understanding.

The reason why that understanding takes hold —  why changing rule sets manage to work and not be suffocated by ridicule — is that the rules remain consistent. They must be. They tell me that in battle, there’s no worry about an axe actually splitting anyone’s skull open, or a shotgun pumping the main character into a gory mess. It means I’ll take 72 damage here, and maybe 145 there, eventually win and get something called experience. But if I see those weapons in the cutscene immediately after, I will know they are now intimidating objects with dramatic implications. The developer has made this clear. Hopefully.

This information isn’t exactly novel and I’m certain even toddlers get the gist of this sort of thing in videogames, so I apologize for the dull refresher. But what prompted this clarification of fundamental concepts is that I’ve come across a unique case of sheer irresponsibility: A game that doesn’t care. Incredibly, I’m referring to The Last Story by developer Mistwalker, headed by none other than Hironobu Sakaguchi, a director that cleanly established the narrative wall in his world famous creation of the Final Fantasy series, the games where you could revive battle fallen party members with ‘Phoenix Downs’ and then watch them die permanently in 16 bit dialogue scenes moments afterward. It was never an issue, in fact the games were famous precisely for this drama.

The Last Story’s universe abides by the same laws at all times save for the start of the game, you know, where it’s most important to establish them. Just some minutes into hacking away at hordes of grunts in this low framerate Wii title, The Last Story dives headfirst into a dramatic movie scene, not unfamiliar to fans of Sakaguchi’s similar work in Final Fantasy IV or VI that many fondly remember for gut punching memories of character death. The understanding is well ingrained: This is a cutscene, death is a finality. And this is the first death The Last Story depicts, and thus is the opportunity to establish this rule set to new players.

The arrow comes through the heart of a party member. The shot is dramatic and slow motion, a freeze frame moment of her pierced chest and then the shocked face of the main character. He rushes over to her, distraught. “I’m sick of all the pain!” he cries toward the ceiling, and she fades. Yes it’s corny, but it’s beside the point. She being in the throes of death is what matters here, and there’s a man weeping over a corpse. But it’s at this second a blinding light reveals itself, claiming a power within the protagonist to better protect the ones he loves, and the cutscene ends. Now get this: A tutorial pops up. 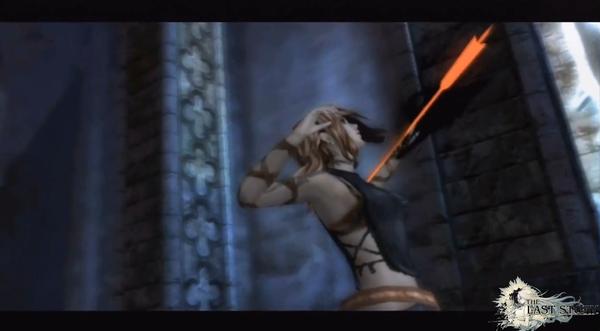 Control reverts back to the player who can now step near this woman’s corpse and bring her back. It’s a new battle mechanic for the rest of the game. Resurrection. She’s alive now. More grunts now arrive and her character A.I. is already rushing into battle and shouting battle cries and dishing out combos. “What in the world is happening” is my only thought here, but I follow suit and finish the fight, waiting for explanation.

It never comes. The girl doesn’t acknowledge what happened. There’s no recognition of the miracle I just worked, no panicked explanation of what she saw at death’s door or of any kind of DMT trip she experienced. I don’t even get a ‘thank you.’ We’re just back in it and I have to assume my character is Jesus in all contexts, cutscene or gameplay. Of course this isn’t the case. In future scenes where character death occurs, these magical powers are treated as non-existent. Treated as Phoenix Downs. Treated as a mutually understood change of context and rules that were, in fact, never mutually understood.

Call it a nitpick if you wish but it is an undeniable case of irresponsibility and laziness, and proves a worthy example of how exactly it feels when games don’t convey context change correctly. The narrative wall between cutscene and gameplay isn’t always as concrete as I’d wish in videogames, and sometimes it’s even a bit imaginary on the part of the player. But as long as rules remain consistent, I’m okay with playing pretend. But The Last Story’s hilarious misstep is simply bad form, especially for a Sakaguchi title, a name revered for establishing this difference in storytelling. Any meaning behind his name when attached to videogames might as well be dead if he’s become this loose on the basics. The cutscene kind of dead, I mean.