YorHa battle android ‘2B’ is sent to confront the primitive machines that have taken over Earth. She is programmed for flight, close-combat, and the various camera angles that Nier Automata likes to swing itself around with. Third person hack-and-slash turns into a shoot-em-up the moment the camera pans overhead. Round the next corner and now it’s a side-scroll roller coaster. Pan up the skirt and — Hey!

Nier Automata, like its predecessor, excels at stimulating the player with shifts between these gameplay perspectives.  The hack-and-slash mode is the game’s primary form and it shows in its attention to detail. Every combo, button hold, and counter attack out of 2B animates with her confidence and indifference to the resulting carnage. Orders are orders and she executes them gracefully. Emotions are prohibited.

Her shoot-em-up sequences are less involved but provide pace and creative breathers. Major plot points may have 2B flying in and strafing enemy robots across the sky, while bosses might  flood the screen with orbs to dance between before resuming close quarters combat. Late in the game, these bullet-hell sequences intensify to standalone experiences worthy of that genre, an impressive achievement. 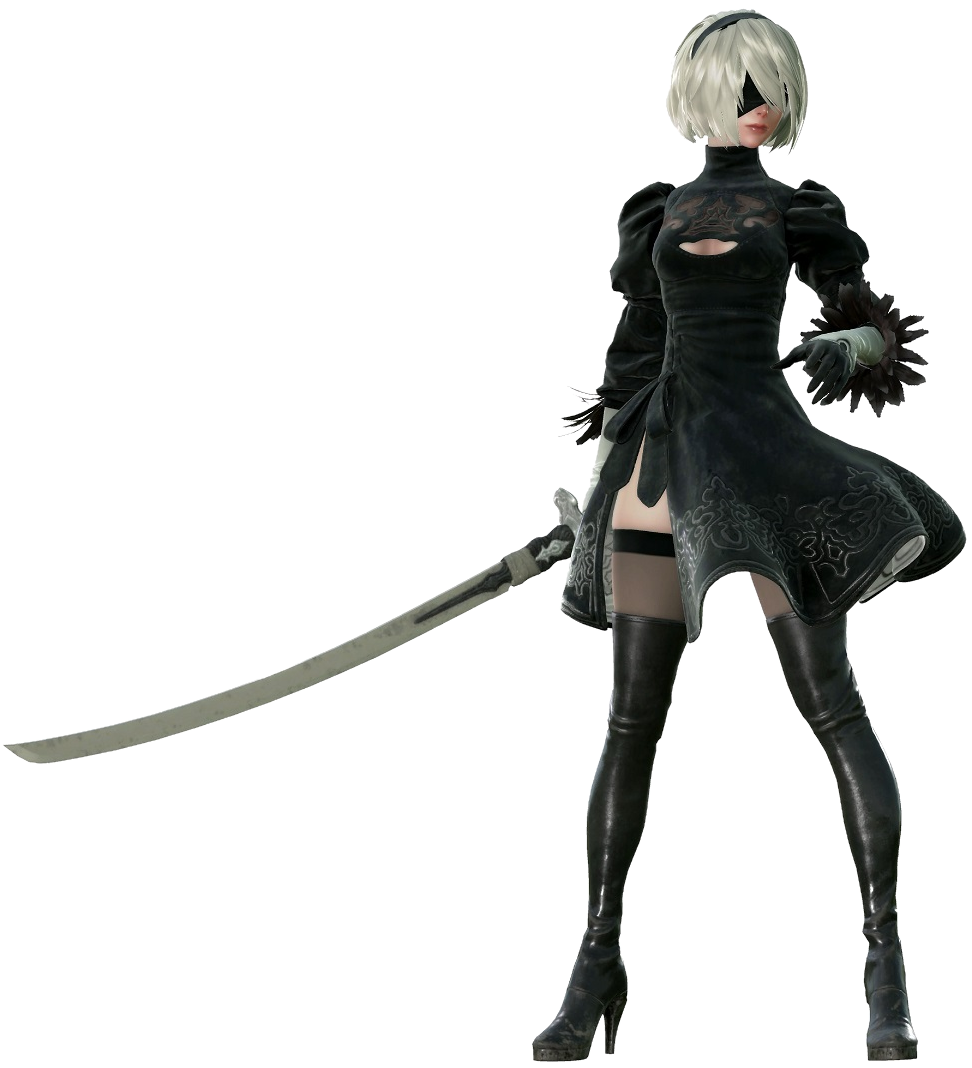 More intimate is the melee. A quick mash of the dualshock animates into swift cuts, spinning swords and boomeranging blades sent out from 2B’s capable hands. Nier Automata is one of those games where you are doing cool things constantly without any real effort. Two decisive shears with her sword transitions to a somersaulted pounding from a 2-handed axe. It sends metal parts, sparks, and fire flying at high framerates, all in a 3 button sequence.

Change up a weapon’s Light or Heavy attack designation or alternate to another weapon set mid-combo. Dice up enemies during a stage dive followed by pole swings off a spear. Go from a katana uppercut launch into a great sword smash back to earth.  Nier Automata has sense of weight, of batting enemies around with poundage or bullying them with crisp viciousness.

It has animation cancels akin to most Japanese action games to the great effect of seamless decision making mid-swing. It has a dodge maneuver that lets 2B slide this way and that like she’s got jet thrusters on her heels. Sprinting and skating, her dress whips back and forth as her gun droid floats beside her firing a constant stream of bullets weaved toward enemies with the right joystick. It’s completely sexual.

Nier Automata is almost too effortless in its control. There’s no decent high-middle ground in terms of difficulty, and 2B is so responsive as a combat model android that she can mash dodge out of poor player positioning. Memory chips that can be slotted inside her for extra skills and passives also end up doing much of the work in powerful auto-heal and high damage output options, albeit in the thematic and fun way of customizing a killer robot. 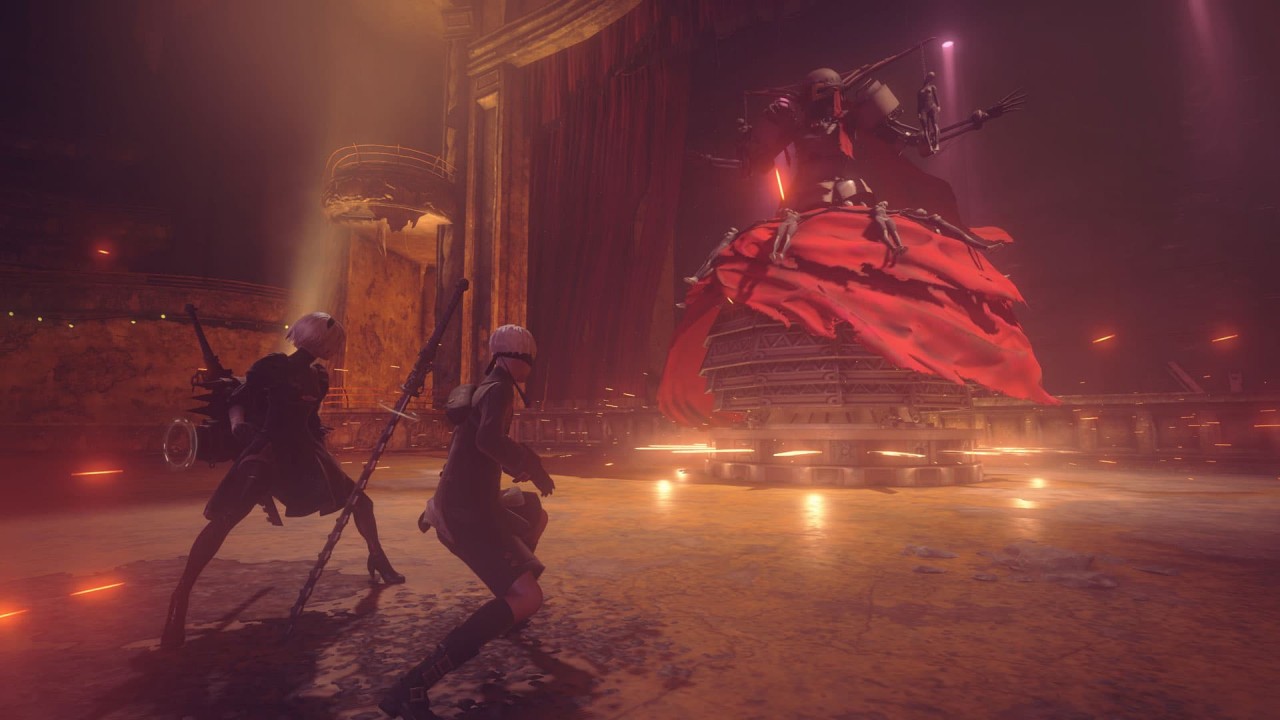 An RPG at heart, Nier Automata combines this stat customization with explorable zones of respectable size, if budgeted design. For example, 2B can’t run through every nook and cranny seemingly offered to her by dilapidated buildings, and wildlife is almost wholly represented by moose and boars exclusively. It’s a quiet Earth, strewn loosely with chests, healing items,  and components for weapon upgrades.

However, the achieved emptiness is appropriate. The bleak world, its washed out color palette, and the enemy robots wandering its overgrowth introduces questions about machine intelligence. Some are hostile, others are aimless. 2B and her companion come across settlements of robots primitively imitate past human behaviors: Cults, monarchies, and pacifists. Carnival robots that throw confetti. Tragic robots that seek love.

Nier Automata presents these case studies but leaves room for personal questioning. Side quests offer additional exploration into the experience of machines and androids alike, but what’s left is really just whatever the player wants to project. Even after the 5 different endings of Nier Automata, there’s no moral of the story or grand question to ponder. It’s about how the characters parse that information into their worldview that makes the narrative powerful.

The separate playthroughs of Nier Automata are hardly rehashed or full on repeats. It places you at new points or perspectives each time, save for one playthrough that does demand some patience. The perspectives changes to 9S, the scanner android companion of 2B. He’s smaller, has fewer melee options, and introduces a ‘hacking’ mini-game that’s essentially a shoot-em-up. 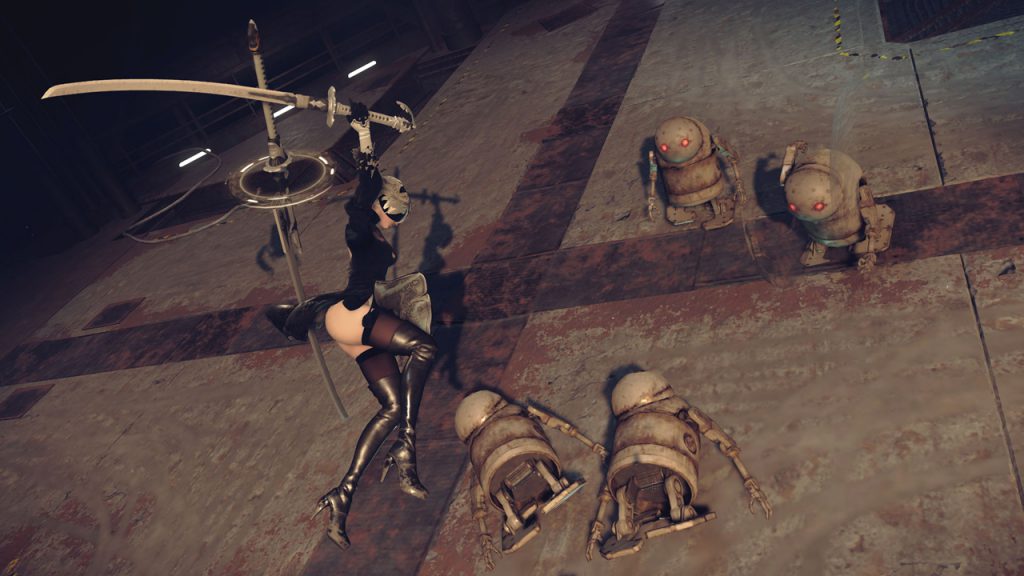 Entering the circuits of robots remotely, he can start playing a bullet-hell sequence and destroy enemies from the inside. Initially a welcome change of pace, 9S’s hacking option and its brain dead difficulty doesn’t revive the needed enthusiasm to make Nier Automata completely fresh again. Extra insights into his thoughts pushed me forward though, as did an incredible english voice performance.

However, if Nier Automata loses the player’s interest in its tedious circuitry, it has yet another character up its sleeve, still more than half a story to tell, and a surreal soundtrack. It re-engages attention to itself so easily. The bizarre behaviors of both android and machine are perplexing, while themes of violence, sex, and existentialism hack into an obsessive curiosity about the world and characters.

Nier Automata is captivating even up through its ending credits, a sequence that manages to bring the human perspective back into the equation. Good fiction takes upon a life of its own and Nier Automata is upright and emergent by its conclusion in this regard. Mankind expresses itself through its creations, and in a future and desolate earth of machine vs machine warfare, those creations may be androids. Right now, though, it’s this videogame, and human emotion spills from every facet of its design.