There’s an item in Stranger of Sword City used to reduce the game’s difficulty. Deep into my playthrough at a point of peak boredom and frustration, I used this item. A labyrinth within an Ice Palace had me beat with its werewolves that blocked pathways and stood behind door entrances, one shotting party members at the battle screen in a game that features permadeath. Boss types — hunted and destroyed to advance the narrative in Stranger of Sword City — were also at this time insurmountable, where dragons and ghost ships devastated my party faster than my stoic looking Cleric could even get his monocle adjusted. Taking all of this into consideration, alongside the looming prospect of repetitive bouts of gear grinding, I switched to ‘Beginner’ mode.

Indefensible, I know. But I am a beginner to the Dungeon RPG genre, and proud of the 20 hour shake I gave Stranger of Sword City before sailing (sort of) through its remaining half on a lowered setting. Maybe this option exists for players like myself who don’t quite achieve the harmony of damage dealing and sustainability in their party. Stranger of Sword City actually demonstrates flexibility but also hard lessons in this regard. In a self-made party of 6, for example, the presence of at least one knight seems non-negotiable for their ability to taunt and mitigate all incoming physical attacks. But what you do outside of that sponge character is widely up for experimentation. 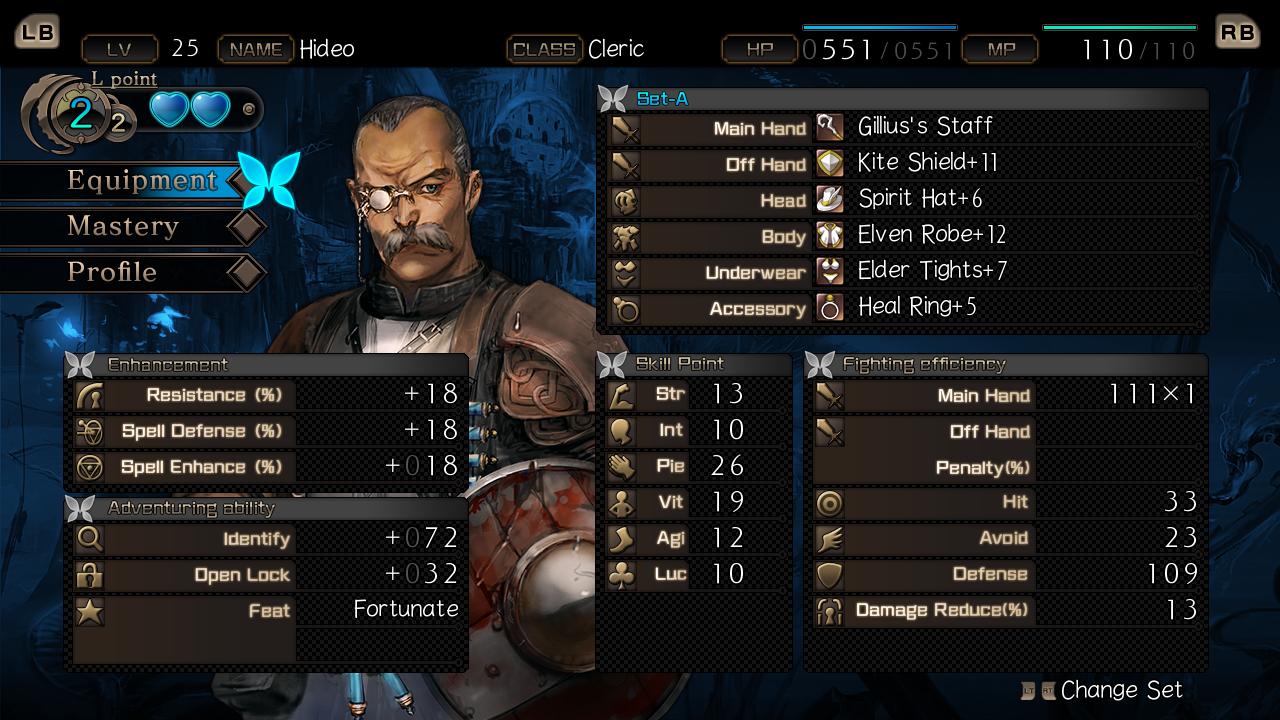 A man with a permanent frown and dark visage acted as my main character and Samurai, and he often used ‘Slash’ to dice up multiple rows of enemies at once. A good spread of it meant my smoking hot elven archer could clean up the stragglers with her ‘Random Shot,’ while an ethereal looking fighter I had named Lucille could measure up the field with her yellow lit eyes and swing her huge 2 handed axe at the biggest threat, for what I’d say was normally 3x more damage than anyone else. Talking big swings! Meanwhile in my back row, my mage looked on with a smug demeanor, saving MP for fights that deserved it, while my cleric stood peering through his monocle, under utilized. But to his credit, demons and ghosts could only be defeated with his quick ‘Holy’ enchanting of the party weaponry.

I mention the looks of these characters because I’ve learned this genre finds great value in imagination, and Stranger of Sword City has got the artistic assets needed to jog it. You can, in fact, choose from among multiple complete sets of different art styles when creating your party’s portaits. From the dark and stylistic form of Yoko Tsukamoto — perhaps the intended form — to a slew of corny, hypersexual and high fantasy anime portraits. You can also freely use portraits from both. In a way, the mismatched bizzareness works because the world of Stranger of Sword City is just that: A mashup.

Escario is another dimension bombarded by elements from other worlds through portals that tend to open up and swallow things. The human main character is involved in a plane accident from earth, but the wreckage crashes down through one such portal. Saved by a girl in a school outfit and pieces of plated armor, she explains her incredible fighting ability is found in all humans who exist here and they are ‘called ‘Strangers.’ The huge sword she’s got? Apparently she can wield it because the gravity is lower, or something.

The whole story is shamelessly young adult fiction, yet it makes a curious setting. Three avatar characters in Sword City, the central hub, are destined to awake their corresponding god entity, but depend on your donation of Blood Crystals to do so. Whoever you, the powerful Stranger, decide gets the most bounty from the bosses in Escario, will decide the direction the world takes. Between exploring labyrinths of strange variety, dialogue shows a tense but valued relationship between those who wish to defend the world from fiends, but who all seek the same end to eventually rule it. Indeed, their warm facade turns dark with the screen as you present a blood crystal, revealing greed, but also new and powerful abilities to the player. 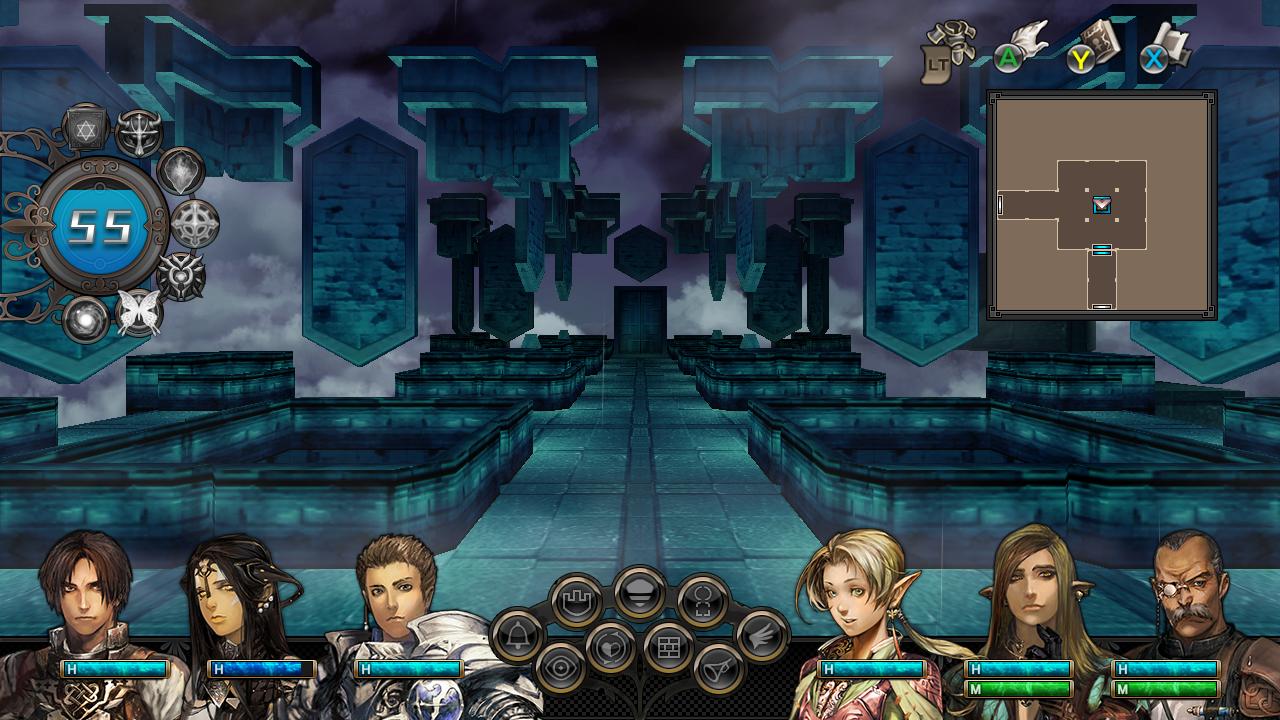 Divinites run Stranger of Sword City’s combat in the face of tougher enemies. It’s a side menu of super moves that’s influence I found overshadowing of my party’s own skills. A gauge builds very easily and can be spent as frequently as every battle turn to use a powerful effect: An all out attack, a massive decrease in damage taken for the next turn, an immunity to spells (including pesky one shot kill scenarios), or a shower of healing every turn for the remainder of the fight. What Divinity you select and at what key moments largely decide the battle, provided your party simply has the gear to dish and take the necessary damage. Battling weaker enemies in Stranger of Sword City, then, is mostly a case of auto-battle (a quality of life repeat command that flings out basic attacks).

Auto-battling leads to occasional carelessness, unexpected character death, and an inevitable reload of a save back at base. Being honorable about the permadeath mentioned before just isn’t worth it. Because assume you couldn’t reload saves in Stranger of Sword City and played it properly: That would mean each character’s 2 to 3 life points would be carefully monitored, where KO’d members must be put in a hospital bed to undergo a long recovery period that was never aptly detailed by any tutorial, forcing you to use lower level backup characters. A reloaded save defeats the purpose of this feature that might have held the most weight in Stranger of Sword City if someone had the heart to treat it honestly.

More than its portraits and more than a particularly awesome ambush battle theme (much too rare), how Stranger of Sword City handles narrative advancement might be its greatest strength. At any point where I felt stuck or lost, I immediately realized I wasn’t because the answer was always the same — defeat more bosses. There is no case of a hidden lever or a tucked away NPC you forgot to talk to. It’s just bosses, and I respect that. A list of them and their locations is always accessible, so the only real question is: How the hell do I beat these things? In this question is great reward: Figuring out what Divinity counters a boss long enough for the party to do damage. But it is also the source of drained motivation. It revealed an expectation to grind for gear — more so than levels — in Stranger of Sword City, one spelled out directly by its labyrinth designs. 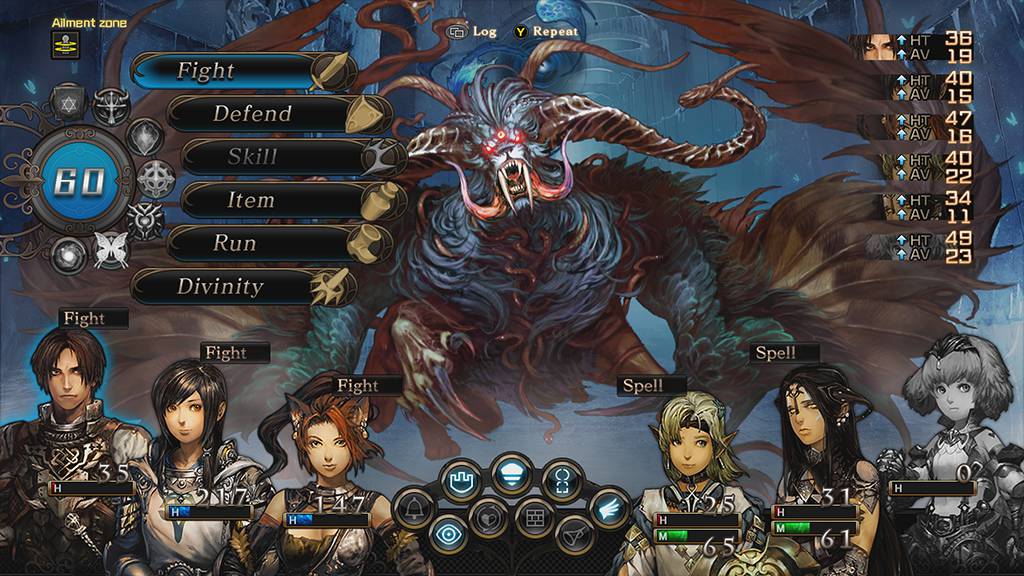 Indeed, the grand “reward” of exploration in Stranger of Sword City’s labyrinths is discovering the opportunity to grind. Ambush spots allow the party to hide in waiting for packs of monsters and their guarded treasure, and different ambush spots hold certain likelihoods for different types of equipment. In a clever way, the party becomes the ‘random encounter’ to the monsters. Consequently however, even my favorite labyrinths — such as one that was a maze made of shipping containers — became exhausting ‘to-do’ list maps of ambush spots: Areas you need to hit before returning to base, identifying the loot, and going back to hit the spots again.

The padding of footsteps and ghostly music applies atmosphere, but the grid maps themselves hold little else. Tutorial characters, 10 hours in, are still rudely peeking their head in on your progress to give you hints about only the most obvious mechanics. Traps and mind games lines some hallways, but are limited to the directional nature Stranger of Sword City is designed by. A spin tile in the Snow Forest rotates you in a random direction upon stepping on it, where at that point you, well, continue on your way unbothered because you have a minimap. There are spike traps that are ironically pointless and in fact impossible to be fooled by because pressing the action button disarms them, all while never being hidden in the first place. A frequent experience of ‘hello ice temple’ and ‘hello every other element’s dungeon’ in the latter portions, Stranger of Sword City misses decent opportunities to play upon its wild setting, instead littering them with grind zones.

Of course, this review loses integrity for a mid-game switch to lower difficulty which was due to a lack of skill and understanding. However, I am more than convinced that Stranger of Sword City is a satisfying play for its demanding boss strategies and a premise that is both magical and creative. But I also can’t deny it as a brutal experience for its ability to, at times, inflict intense boredom with its newspaper route grinding scheme. At every turn I was always eager to see more of its bomb character and creature artwork, riveting story scenarios, and cross class skill experimenting. But I would do anything to lessen the grind. You have to understand. I’m a good person, I swear.