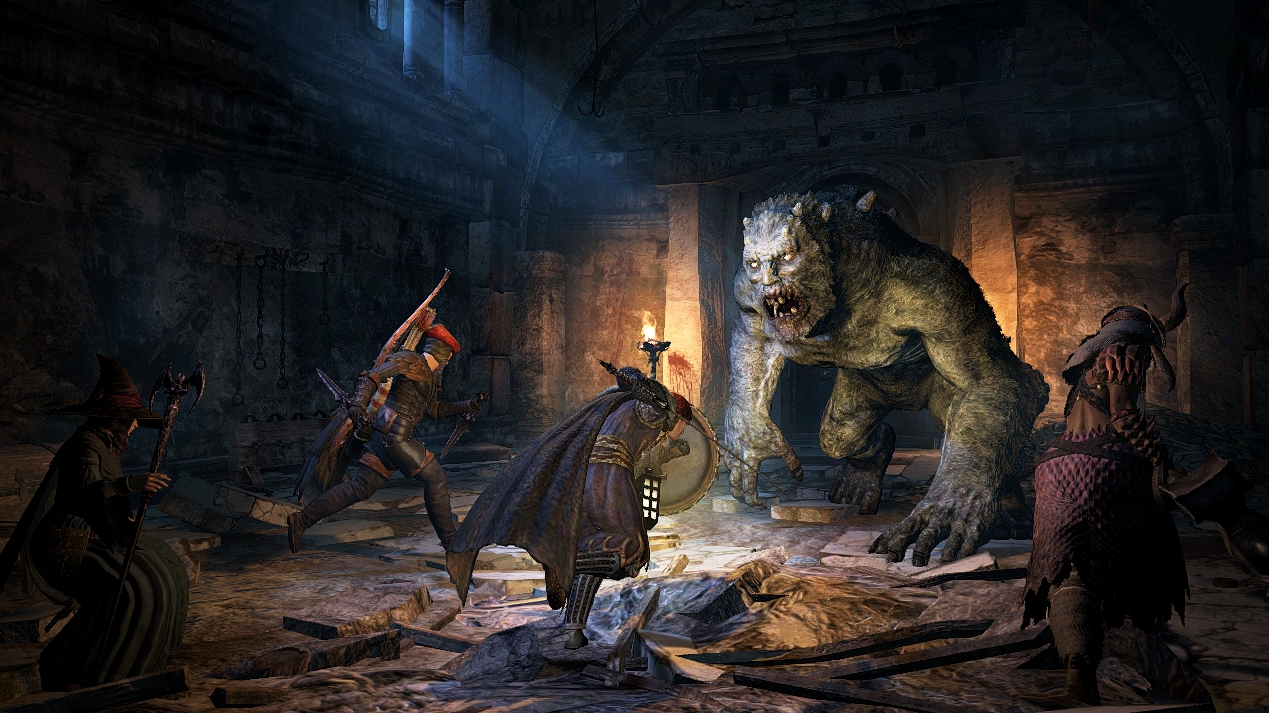 Swinging a sword, raising a shield, a bandit’s approach, a wolf’s challenge. Dragon’s Dogma: Dark Arisen adds weight to scenarios that RPGs often take for granted, and in them creates newfound imagination. Weight I can feel in the animations and controls, where the notch of an enemy arrow has me peering over a rusty buckler in an anxious and steady approach, broadsword heavy in the other arm. My character model braces as the shot goes off, sparks shoot off metal, and a moment later I’m sprinting into a forward thrust, a windy ‘FWOOMP’ and a good dose of freeze frame accompanying the attack. The game’s got feel, it’s undeniable.

Truthfully, it might be Dragon’s Dogma only gift and so I’ll not understate its immersive qualities. Because I struggle playing pretend, honestly. I was never a Dungeons & Dragons guy or someone who could hold character. The grit of Dragon’s Dogma reveals a bit of what I’ve missed out on, I think. And it’s more than just the solid heaviness I felt as a shield and sword Fighter who could pound hilt to parma to taunt goblins and spirits, or later as a two-handed Warrior, who could brandish a greatsword across her chest and barrel into crowds of enemies like a ram. The skillsets feel tangible and satisfying, but the world around them does too. Travel, specifically.

Dragon’s Dogma utilizes night and day with powerful effect. Leaving the coastal home town of the main character grants a long road between explorable wilderness and destinations far off. I’m talking 15, 25, or 30 minute walks to cities, a tiny stamina bar for sprinting, and camps of goblins and bandits along the way. Destinations are distant enough to almost assure you experience the end of a day cycle and pitch black night that follows. Shapes can barely be made out in this level of darkness and harpies and wolves are quite predatory now. It’s quite a feeling, indeed, to travel on foot with only an oil lantern and sword to guide yourself to safety, and it makes the resulting trading in of coins for better chainmail and greaves that much more rewarding.

While these qualities stay intact throughout Dragon’s Dogma, they erode greatly in the face of its questionable quality control.  This is an abusable game to the point of incredulity. An intimidating world turns into a playground to stomp upon, a difficulty curve that dives downward in awkward suddenness. It’s hard to pinpoint when it exactly happens, too. Shortly into the game, that much I know, probably once a healthy set of gear is first purchased and you gain access to 3 recruitable A.I.  It could also be that I realized the effectiveness of ability spam — first to knock an enemy over, and then more upon the fallen bodies until their health bars emptied. This is a pretty safe bet for the entire game, where by its end I was swinging a greatsword in spirals to knock everyone over, and and again and again to be sure they never stood back up.

Now the world has lost its bite, you could say. And perhaps I could go well out of my way to explore strange regions and get my face pushed in by a roaming chimera or golem, but this bears little motivation. Independent exploration loses its allure upon the realization that nearly all locations are intended for quests. A hidden path to a goblin encampment or giant monster is enticing the first time round where the decision falls under personal volition, but to find soon after a quest associated to it — an order to slowly trek back and dispatch the area again — does take the twinkle out of an open world experience. It means that what I thought was magical happenstance, like discovering an abandoned mine of zombies or stumbling upon sleeping basilisks in the shade of a forest, was actually meant for a quest from a city or encampment that I should have visited first. In this way, Dragon’s Dogma is less ‘open world’ than it is a linear game likely to be experienced in the wrong order.

Aside from fetch and kill quests, some attempts to be a bit grander only further reveal lack of polish. In one scenario, after following a city guard to hunt a griffin and awkwardly beating it down myself as the soldiers bugged out and swung at rock formations, the commander shouted for us to follow the wounded beast to some tower. “Quickly!” he says. So I jog alongside his men thinking we’re about to intercept a griffin and where do we end up? Back at the city where the troops have now disappeared into the wooden gate. They’re gone. I check my map and the quest objective is a 30 minute walk far to the East. Better yet, I’ve been down that way already.

Downing those big creatures isn’t a majestic process, either. One of Dragon’s Dogma: Dark Arisen’s slogan features is the ability to climb atop a variety of larger enemies and stab them. Repeatedly. But it really looks a tad ridiculous to face a humongous dragon, stitch yourself to its chest, and beat on it like a madman with the hilt of a sword for what feels like forever. Occasionally this mechanism prompts the grand reenactment of Legolas jumping atop the tomb troll in the first Lord of the Rings film, where you find a perfect ledge to leap from and onto a golem’s head. But for a game that otherwise has impressive animations, the feverish stabbing of latched character looks nothing but janky.

Now imagine that long fight with a giant dragon, and maybe it’s down to 50% health. Suddenly, the rest of its life bar disappears and the thing dies. Not a glitch or bug, no. See, your A.I. party member finally decided to cast his good spell. I employed two mages in my game and this happened all the goddamn time. They can one shot anything in the game when they feel like it. These A.I. followers, Pawns they’re called, are avatars in the story who lack humanity and live to assist the chosen one. In gameplay however, they merely act as decoys that lack intelligence, occasionally deciding to instantly kill what’s in front of them.

It would be irresponsible not to mention what is arguably the biggest oversight in Dragon’s Dogma: Dark Arisen: Restorative items. They are inexpensive and completely spammable. You can buy 150 patches of grass and press a hotkey to instantly regain health at any point. This works for endgame and all its challenges. The game is perhaps too easy to warrant it, but I did use this approach to gain unlimited stamina by purchasing mushrooms in bulk. Not only could I spam attacks infinitely and be invincible as a result, I could also sprint endlessly which conveniently lessened the game length. None of this is overstated. You can ignore it, but it’s there.

As is the godforsaken dialogue. ‘Naughts’ and ‘aughts’, ‘tis and ‘thy,’ — the entire world feels like a massive and awful Renaissance Fair. More so if you leave the Pawn dialogue enabled and all their pull-a-string remarks like: “Tis a troubling foe!” or “They ill like fire! Ice as well!” But personally I left them on. Because as the initial magic of this game wears off, it takes on a new identity of a broken and hilarious experience of spammable attacks, infinite health, and ridiculous ramblings. Laugh and enjoy at least that.