Disclaimer: This review might lack detail  toward the battle system of Grandia II. I simply didn’t get to see much of it. It took one area-of-effect spell — a firestorm, a tornado, a storm cloud — to eliminate all on-screen enemies for the vast majority of the game, and I say this without exaggeration. Monsters rarely ever got their turn, and any intricacies I was meant to experience on a regular basis were, by consequence, lost on me. There were a handful of battle commands I never scrolled down to and I couldn’t tell you what they were for. There was a shield icon for a defensive stance, probably. And a white flag which I assumed is the ‘Surrender’ command. Who would ever need either is beyond asking, and the others I have no idea.

Not being facetious, here. I finished this game watching the same 20 second spell animation on repeat for the better part of 23 hours; typically an electrical storm that covered the field in an ugly mess of purple before producing extreme damage numbers upon every unit on the field. It’s just a spell I had, and I used it because every battle starts with enemies grouped together. No abuse here, just common sense. It kept working so I kept leveling up the skills and buying mana potions in the rare case of my pools running out. Late game when the difficulty ramped up, I admittedly had to start using two AOE spells. Both of which still came out before the first turn of any monster. 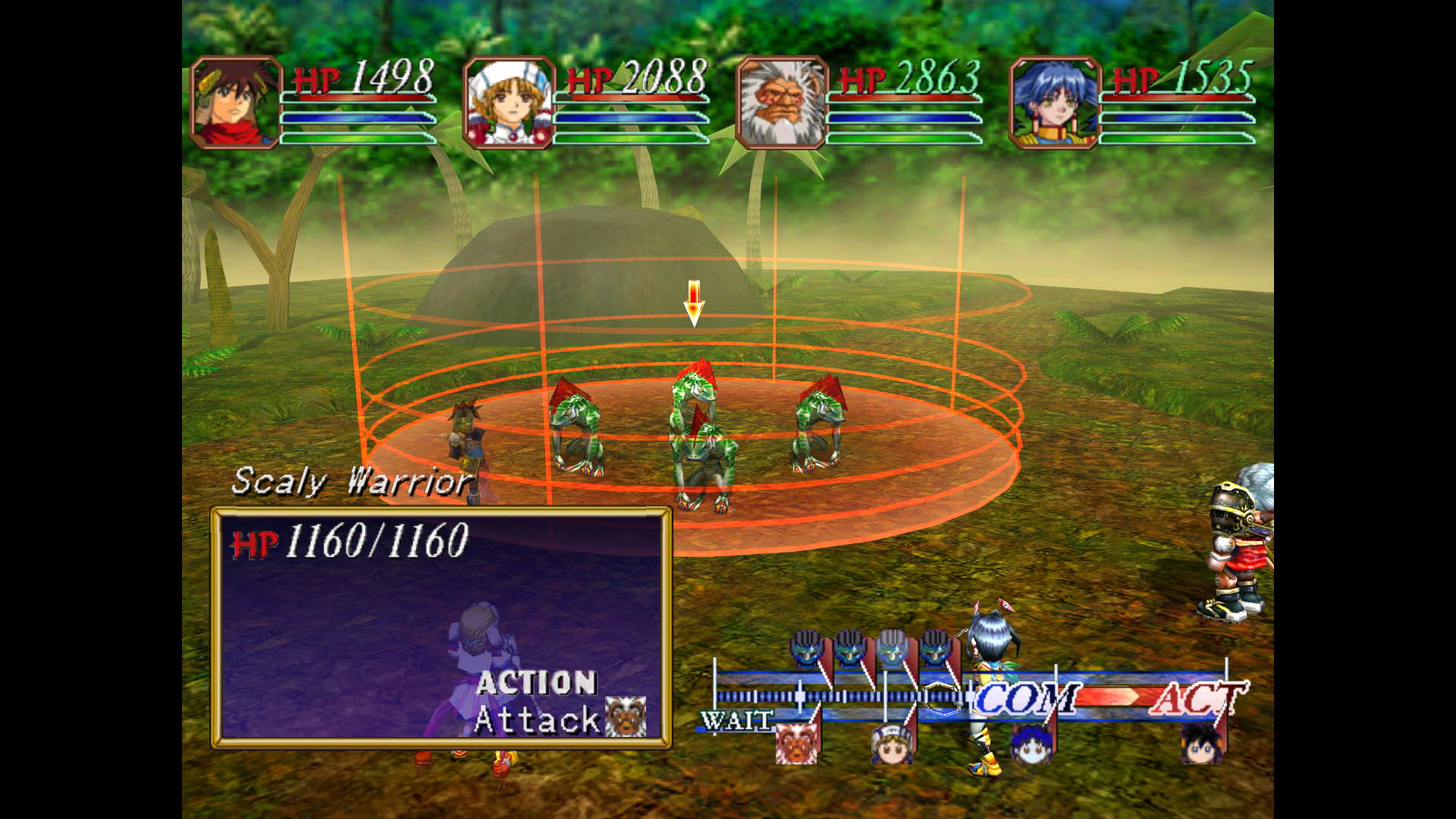 I’m not sure if this was just overlooked in testing or what. Because if we ignore AOE abilities entirely, there is some semblance of real mechanisms at play. A racetrack like gauge shows incoming turns for all units. Toward the end of the gauge is an execution point where a command is selected. A short distance from there is the actual ‘finish line’ where activation of that command happens. The main goal of this system is — when you see the opportunity — to interrupt an enemy between its execution and activation phase. An attack between this point will cause a ‘Cancel’ and reset his entire turn timer. Tough!

It sounds more engaging than selecting a spell and rolling your eyes toward the ceiling, but I gave this melee approach of canceling enemy attacks a brief attempt, and found it unpolished and annoying. Character pathing is bad and movement occurs in real time. Units must move around other party members and enemies, taking an unpredictably long path around the field. This throws off timing for ‘Cancels’ and creates other odd occurrences, like swinging at thin air because an enemy starting moving just as a melee strike was winding up. It feels messy and haphazard. You’ll screw up, take more damage, listen to a lot of cheesy shouts of “heee-ya!” and most of all, spend a lot more time compared to firing a single spell cast.

It’s a big problem. Because when battles cease to be battles and instead are pointless interruptions, drama is lost, and Grandia II ceases to be taken seriously. I remember one scenario in particular where the party had to double back out of a dungeon. Enemies would ambush us at every turn, but they went down with 2 spells per usual, and I thought nothing of it. What I failed to understand was the gravity Grandia II was trying to convey. This scenario was meant to be intense. The battles were meant to be tooth and nail. I was meant to feel overwhelmed, so that the ensuing cutscene of a party member sacrificing himself to save us would actually hold weight. But in the moment it didn’t. The character screamed for us to run and that he would “hold them off!” but all I could think in my head was “Wait, stop. We’re doing perfectly fine, you don’t need to do that.”

A lot of the drama is goofy in its own right, anyway. Voice work is hilariously over acted, and morals boil down to learning to love each other in face of a villain who does not believe in love. The main character, Ryuudo, is an expert sword fighter for hire, and he’s very rude! Then there’s a priestess, Elena, and she’s very humble! I wonder where this is going? Then there’s an android who does not understand what ‘having a heart’ feels like, and a talking lion beast man who can smell danger in any environment, including outer space. Each character reaches their respective epiphany, and will at one point walk toward the center of the screen and proclaim how they finally understand that love is the answer. I can do corny but this sort of thing sits well below my tolerance threshold.

The most engaging part of Grandia II comes as a backhanded compliment because it involves overcoming the limited field of view from the camera. It’s an isometric game but zoomed in an unhelpful amount. With just a compass and tons of winding paths in caverns and forests, it’s a constant challenge to keep your bearings while rotating the camera to locate the next path. It reminded me a bit of Breath of Fire IV and how the viewing angles were so limited. Fighting the camera is actually kind of engaging, though I doubt that was the intention in either game.

Production is spotty, voice work disappearing entirely for large stretches of game time and then suddenly returning at random points. Environmental sounds take the forefront of quiet scenes, so you’ll hear repetitive machinery or birds or crickets for minutes at a time while reading dialogue.Character models themselves are blocky and unflattering and represent an early and unimpressive advancement from the PSX era. Spell effects are rendered as two-dimensional cartoons, which creates a bizarre and bad looking cel-shade when cast upon the 3D battlefield. As stated they are also total overkill, from nuclear explosions to volcanic eruptions, the animations are both long and low budget.

These criticisms are mere formalities in the wake of Grandia II’s mishandling of area damaging abilities which cannot be overstated. I mention them only because someone will undoubtedly respond with: “Then don’t use the spells!” But willingly ignoring good strategy doesn’t do it for me, as pretending they aren’t there is even more pointless and depressing. Hundreds of encounters all end in a single spell cast in Grandia II and that is a fact. In my eyes, that’s hardly a step above a piece of broken software, and a fair case for one of the worst games I’ve ever played.