Another world turned to sand, the two magical guides of Radiant Historia grow disheartened by their results. Reluctantly, they rewind a new timeline and await the next wielder of the White Chronicle. It comes to Stocke, a renowned special agent of the Alistel kingdom. During a briefing, the rook is suspiciously handed the magical tome by his employer as a ‘good luck charm.’ Although Stocke posses skill with the sword and has the ability to push and swipe enemies to different spaces across grid tiles,  he must also learn to rely on this magic book to leap across time, fix past mistakes, and right the world’s course.

The blank paged book envisions a failed outcome — among more gruesome details — for the first mission of Radiant Historia. Stocke shakes the intrusive thoughts off, but the city of Alistel doesn’t let up on the sense of foreboding. Dangerous research of ‘Thaumetech’ weaponry goes on underneath its metal grates, and a cello groans upon the rusted gears and hot smokestacks of the mechanical kingdom. Radiant Historia’s soundtrack is special in environments like these, Alistel’s grimey inner workings and somber themes successfully conveying that larger motives are at work.

From a point-and-click world map onto the first zone of Laviz hills, enemies bite at the heels of Stocke and his two subordinates. Collision with the sprites prompts transition to Radiant Historia’s battle screen, where targets can be pushed, yanked, and pulled across tiles and into high yield combos. The turn based system masters a niche between puzzle and violence, where as soon as the field loads, the player is seeking opportunities to stack flaming chickens, mana sucking toads, and sabertooth tigers onto a single space for a massive killshot. The ensuing dissipation of sprites among big damage numbers and spell effects provides a hopelessly addictive ‘jackpot’ mentality.

But it isn’t long before Radiant Historia hits its first roadblock, a southern path sectioned off with a barricade. Stocke has no choice but to command his party north where only death awaits in an encounter with brutal enforcers not privy to being pushed on the grid. Though the scene performs powerfully, it would in fact end the game if not for a save point appearing from thin air. This moment introduces Stocke to the magical tour guides of Historia, and the White Chronicle’s ability to load save points from others time passages in the story.

Dead-ends are repeatedly met and they can be literal, like the barricade blocking the southern path. Other times they are simply scenarios that demand solutions Stocke doesn’t currently have access to. From explosives needed to bust into a mine, to learning a dancing skill so you can go undercover as a circus performer, Stocke must put his story on hold and jump to the past — and even to alternate timelines — to locate an item, key information, or an ability taught to him by an NPC.

Other times it’s a question. A reconnaissance member is late to a meeting point — do you go to search for him or hope he eventually shows up? Radiant Historia can easily route itself to another failed world depending on Stocke’s answer. These outcome are a valuable growing experience as the character can witness failure despite his good intentions and even smart decisions. And it’s never a punishment to the player or a game over. With the White Chronicle, it’s merely another step toward the right direction. 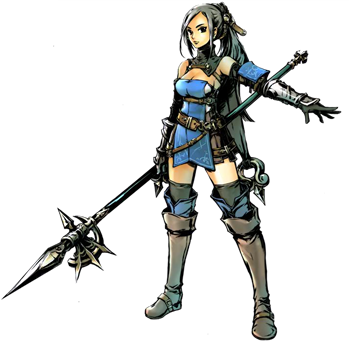 Radiant Historia does well to invent exploration of a linear structure, introducing skills to Stocke such as bomb placement, a hidden treasure detector, and even cloaking that makes revisiting past moments in time enjoyable. Repeated environments do become stale, but with each branch in the timeline, new allies are met and fun strategies begin to form. A satyr girl with a flute can summon traps on tiles, where, with a little teamwork, an ally can push enemies onto them. Raynie, a pony tailed spear warrior, can cast elemental nukes on clumps of enemies brought together by Stocke’s ‘Push Right’ and ‘Push Left’ abilities, or if preferred, a gorilla man named Gafka can punch the lights out of a single target while a princess with a beam rifle targets entire columns.

Characters phase in and out but it’s never confusing. The use of save points is cleverly thematic, loading previous events but keeping gear and level progress. A storyboard map provides ways to deduce locations of the next trigger, and repeated cutscenes can be skipped to get to the point. They themselves succeed with smartly written dialogue, richly colored portraits, and generous use of simple exclamations of  ‘!’ and “…” chat bubble to express dramatic pauses in conversation. A favorite scene is when Stocke and his superior both react to each other with ellipses bubbles, both unwilling to admit their knowledge of the book’s mysterious power, as both are forbidden to do so by the genies that work it.

Hidden motives, sudden dark turns to premature endings, and an excellent point of view character in Stocke who is a good man and unafraid of being a solider, gives notions of a classic game in Radiant Historia. However, the experience is stretched thin with unnecessary attempts to grandstand itself as an epic. Other nations and politics are brought into the fold to create a worldwide viewpoint where Stocke must defeat secret temples to prove himself, and endure repetitive war table conversations about flanking this enemy or ambushing another, all scenarios with their own roadblocks and ‘bad choices’ that force him to again ride an ever lengthening Historia timeline. 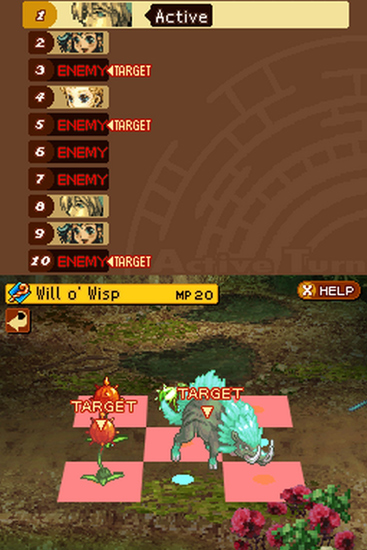 The ‘bring all nations together’ sidetracking doesn’t bodewell for Yoko Shimomura’s musical arrangements either, revealing a small soundtrack that resorts to the constant repetition of “bad things happening” and “we did it!” musical ques. Nor does it help Radiant Historia’s excellent examples of early foreshadowing, now mired in characters and dialogue who all clutch information from Stocke, yet not so tightly as to avoid repeatedly telegraphed clues. Conversations taper off into “But Stocke….if that happens…” “What?” “Nevermind..” moments. When they’re finally ready to be forthright, the buildup has already been weakened significantly by their obnoxiousness.

Returning to the battle system, an effort to challenge the player with rooted enemy types that cannot be manipulated succeed in demanding strategy, but the buttery joy of pushing units into stacks is sorely missed. ‘Difficult’ enemy types cause rapid mana starvation, a hesitation to use a limited supply of rare restoration crystals, and awkward trips back to the inn. Crowded zones of roaming enemies that respawn after each load transition, many may as well be run past altogether. Bosses are still handedly beaten with an underleveled crew, as excessive combo chains make quick work of the giant forest bears and malfunctioning mecha encountered in the story.

Fights toward the end, however, demand novel ways of thinking about Radiant Historia’s turn swapping feature. A list of upcoming turns viewed on the top screen, players can swap turns with other units. By even allowing enemies to go before themselves, the party can form longer combos, an extra air juggle, an opportune trap placement or the additional ‘Pull Forward’ of a grappling chain to get a clump of enemies prepped for a final blow.

In all aspects, Radiant Historia is about this kind of causality, both in battle and through manipulation of story events. It reveals favorable outcomes but also the fragility of the world, and this thematic consistency, however stretched, makes Stocke’s journey unique and worthwhile. What is right for the world is ambiguous, a question hit back at the player by a relatable villain and battles of intense turn order trickery. Push him to back on the tiles, form combos that don’t let up, and change the order. Remember that in Radiant Historia, failure isn’t final — it’s merely an opportunity to do things differently.