Hitting for ‘0’ Damage in Vagrant Story

I had sporadically given Vagrant Story a few not-so-fair shakes before always abandoning it. Whenever I rose from the opening dungeon, I did so defeatedly with a worthless character. He’d hit for ‘0’ damage.

Talk about unmotivating. However, from the little I saw of it, I’d pine for this experience later. It seems for years now, whenever others asked what I was playing, I would mention how it ought to be Vagrant Story.

To get Vagrant Story to work properly I ended up having to read (gasp) the manual — a piece of advice nearing its extinction in today’s feather light product cases of DLC slips and extra advertisements.

Vagrant Story is at least kind enough, if in little else, to provide its codex within the menu screen.

It means that if your performance is found unsatisfactory, then one of the above elements is almost certainly working against you.

Before turning the game off forever, though, hear some reason: While Vagrant story is beautiful and the action exciting, its real challenges take the form of stat sheets and menus. Additionally, weapons and armor must be crafted to better play these numbers.

Hammers and heater shields, plated gauntlets and sallets, francisa and falchions, rapiers and staves — hundreds of combinations await to be combined with one another, down to the very kinds of hilts you attach them to. With experimentation, a pattern of happy results can be found.

Despite how dull a strict numbers game undeniably sounds, it is a genuine joy to, at times, be met by a brick wall of a golem and delicately try to deconstruct its weaknesses. You’ll dig through menus, swap equipment, apply buffs and debuffs until you finally light the target area up and see the damage count estimate at a healthy level.

That result is a victory all its own before the first attack is even animated. Indeed, the ensuing combo chains are just a fun bonus.

Vagrant Story’s combat system consists of a pause screen, the targeting of a particular body part, and a strike that will prompt another if you land the button press just right. Between finished moves the enemy will fit in their own with powerful blows that inflict status ailments.

Although it is possible to brute force yourself past enemies using continuous low damage chains, Vagrant Story will punish the lack of strategy. It’s called your ‘Risk’ meter. Chain too many attacks and Risk increases, greatly reducing your accuracy and rendering you useless if you don’t let the meter settle.

Every Weapon a Tool

There is no ultimate weapon that can work across the entire board for such a purpose. You need options. Different types of steel are necessary each time you step into the many isometric zones of catacombs, wine cellars, town streets, and cathedrals.

And it’s not only wise to carry weapons of several types. It’s paramount all are equally used. A sword that collects dust will demand its proficiency re-accustomed before it returns to its prime. Select smartly,then, but also don’t swing too freely. The same sword will dull by using it on targets it isn’t meant for.

Vagrant Story, the best looking game on the Playstation?

Understanding so little about an in-depth system no doubt leads to frustration. Why insist upon its stubborn unfriendliness? Put simply, it’s downright gorgeous to look at. Both exotic and medieval in its direction, it features characters of memorable beauty. Chiseled muscles, tightly worn tunics and metal bracers, short skirts and iron greaves; the aesthetics are wild, smart, and pleasing to the eye. 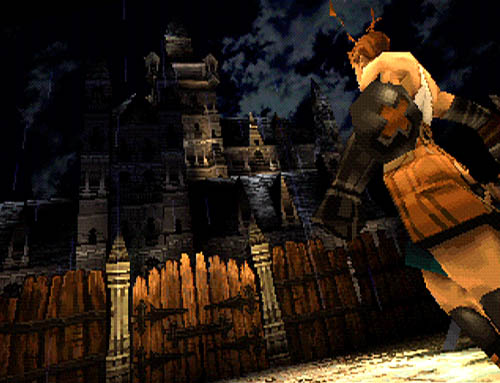 I found Vagrant Story’s introductory cinematic so visually arresting that I couldn’t help but give it a more deserving chance.The poise struck and the look that Ashley Riot, the special agent Riskbreaker, shoots the camera as he collapses the manor gate behind him had me captivated. Credits rolled, the mansion burned, a dragon awaited to greet Ashley’s entry.

The cutscenes and scenarios rival those made still, and the non-voiced script is written with an elegant middle English that never sounds over-saturated, a quality rarely seen in the medium.

Give Vagrant Story as Many Chances as You Can

After the tedium, it proves itself an epic. Ashley is sent on a mission to Lea Monde, a dead city paled off for the dark magics that work within it. While cruel, the spell that Lea Monde casts on the player is an alluring one: The mysteries of a dead city and those who run willingly to its clutches, how it taints and questions the clean slate of agent Riot, and how truth proves as illusory as the ghosts that claim to speak it within the cobbled walls.

Ghouls and zombies wail and whisper in the cellars beneath the town, minotaurs block passageways and magical sigils seal doors to advancement. But it’s a puzzle well worth figuring out. Although the same can’t be said for the many block pushing puzzles of startlingly less elegance, but equally rigorous difficulty.

It’s not all just a lonely adventure through a tomb, of course. You do, soon enough, find yourself in Lea Monde proper, emerging bleary eyed from all the menus of equips and unequips, gem attachments and spell preparations, number comparisons and stat analysis, finally unpausing the game to now see the earthly tones of a sunlit, French and Romanesque city, and the dragons, ogres, knights, demons and dead that walk among it.

If you must put Vagrant Story down, at least give it until this point. If anything, it may just convince you to pick it up again and again, until you get it right.