Final Fantasy XII is graphically ageless. Textured hair, immense costume detail, and an earthly color palette, it seems natural the game focuses on a macro management style of play. Instead of the menu flicking of series past, Final Fantasy XII prefers you to watch the action unfold. Through its savannas, woodlands, and mountains populated by roaming wildlife, a party of 3 A.I. combatants are guided forward, their behavior yours to program. If aptly planned, the characters will support each other and dispatch the dangers around them, appropriately and automatically. This leaves you to pan the camera around the game’s beauty, as well as your own intelligence.

On the streets of Rabanastre, you begin as Vaan, a street urchin dealing with rat infestations and making deliveries down the bustling alleys of the desert city. The world of Ivalice is built with a kind of snazz players of Vagrant Story and Final Fantasy Tactics may find familiar, Square’s high production values accompanying a team of talented artists. In cities such as this capital, the density of NPCs and their individual animations is unprecedented. Shops are fully furnished and an assortment of races barter in the streets, from regular humans to crocodile like Bangaa, or adorable rodent Moogles that hop onto counters and order drinks. In the style of the citizens and architecture, a mix of medieval Europe, Mediterranean warmth, and a Star Wars splash of Tatooine grunge can be seen throughout. 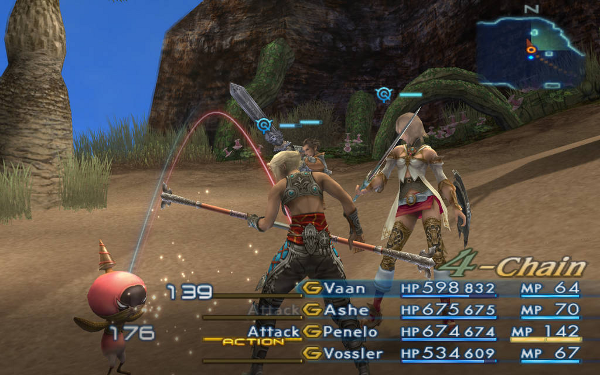 Dialogue prompts gently click for attention from city goers as interactable streams of thought. Ambivalence fills them as Rabanastre awaits its new rulers, the kingdom only just ousted by the Empire and treacherously so. Vaan decides to up his thievery game during the transition, and his rash infiltration of the royal treasure chambers lands him into a more epic play of events and into the company of two sky pirates with equally misled intentions. They team up, reluctantly, freeing a shamed knight doomed to rot in a dungeon, and bumping into a rogue princess who would lead a resistance against the occupying Empire. Surprisingly, if only because the genre is so keen on depicting young characters as focal points, Vaan takes a backseat to these new personalities. In a lovely and almost casual Shakespearean dialect, the other characters serve to drive the story and not the young layman.

This isn’t necessarily a criticism, in fact, FInal Fantasy XII is acutely self-aware of its cast. In many cutscene shots, Vaan and his peer Penelo are purposely put off to the side or in the distance, shown teasing, bickering, and playing with one another as the adults discuss matters in the foreground. In a couple instances, Vaan is told flatly to shut up as quickly as he opens his mouth. An attempt to reclaim a princess’s birthright along with her family heirlooms of destructive power, a story of vengeance forms with the two youth as its backdrop, representing an innocent generation that the heroes hold at stake.

The cast is ensemble, but the execution behind the smaller players isn’t entirely effective. Vaan still gets the same memo as the others, an obligation to be ‘developed,’ however forced. To do this he must interject at strange moments, his age difference between other party members creating little chemistry. In some of the best scenes, Vaan pops in for a few words and effectively demolishes the intensity of an incredible script between knights, royalty, and wiseman.

Leave the kids out of things if you wish. A limit of three on screen party members, travelling the multi-field zones of Ivalice can be enjoyed in the company of only your favorite actors. Balthier, the sky pirate, is bound to earn a spot. He wears a studded vest over a white cloth shirt, cuffs open and ammo pouches dangling at his side, stepping through dungeons in tapered leather pants tucked over a pair of exquisite gladiator heeled boots. He is but one example of Final Fantasy XII’s incredible, if other worldy, character design. The handsome pirate paces round packs of enemies, shoulders relaxed and shotgun in hand, and when his action bar fills he’ll extend the gun outward and cooly absorb its recoil, a glorious pop and puff a smoke to deliver a smattering of armor piercing damage.

To better appreciate these details and at their utmost smoothness, it’s best to use Final Fantasy XII’s Gambit settings. These are behavior macros manually set for each character. Set a criteria such as “Party member below 30% health” and then select a resulting command like ‘Cure,’ for example. Now you have a simple healing Gambit to keep your party moving. Resolve status ailments based on when they appear, prioritize enemies of a certain strength or type, use spells in retaliation to detected weaknesses, and sort target order based on position. The object is to avoid menu interaction wherever possible and to let Gambits streamline the experience, where clearing plains of wolves and wyvern is best enjoyed uninterrupted by manual input, while lovely animation and melodies tide over your successful formulas. 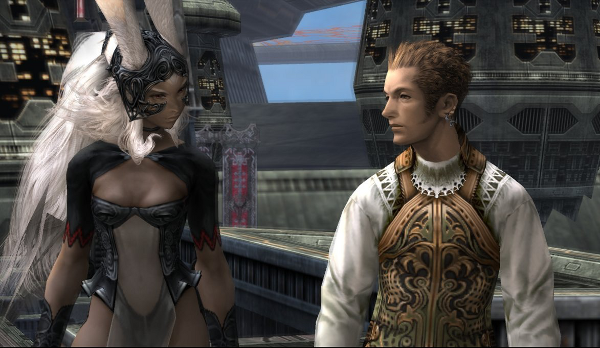 Outside of their dashed looks, party makeup is conformist and limited. As previously stated, only three can be on the field and you’re in fact cheaply incentivized to never use the others. Swapping characters can only happen when current members are untargeted, meaning mid-fight swaps are cumbersome and only done in dire circumstances, bringing in an underleveled Vaan to quickly throw a revival potion to someone who matters. To purchase proper gear for everyone is outside the budget, and progression on what’s called the License Board has a homogenizing effect on the party anyway. License points are spent on tiles of the board that pertain to stat upgrades and equipment or ability unlocks. The idea was likely to have the player create a kind of useful variety of archetypes, but this logic leads elsewhere.

First of all, magic isn’t potent until late game so a ‘mage’ is outside reason. Characters lack the mana pools to keep protective magic active, let alone spare much for the offensive kind. Scratch that section off the board. Next, a set of skills called Techniks allow you to do all sorts of gimmicks, like inflict damage modified by the amount of steps you walk to a creature, and are effectively nonsense. Scratch those off. All that’s left now is what matters: the hit points, attack strength, and action speed augments, all conveniently found on the same region of the board. Grab those quickly as you can, and now everyone is quite powerful and interchangeable, a safe combination of whatever weapons you fancy, accompanied by a light dose of learned healing magic to sustain the journey. This makes the programmable A.I. starkly less enigmatic than it sounds, but simultaneously easy to manage, control, and enjoy.

Interruption is to be avoided but sometimes it isn’t the player’s fault. Characters behave on active time bars and must deal with the infuriating pattern of readying weapons before each enemy. You kill a pack of steel claden unicorns, and even though another pack can a short ways off, weapons must be rearmed. It’s a recurring half second of sheathing and unsheathing weapons that damages the sense of seamlessness carefully procured by Gambits. More obnoxious are the short buff timers. Casting ‘Haste’ to make your actions come out faster is offset by the fact that ‘Haste’ will have to be recast after just a few encounters. Fast expiration of buffs frustrate more than their effects are worth. Stop and recast. Fight. Stop and recast. Fight. Stop and — Ugh, out of mana again!

These gripes are ignorable to some degree. You don’t need the buffs. And perhaps it’s best not overthink a system of ultimately simple automation. It’s an easy pace to find, and when you do, Final Fantasy XII is a satisfying affair of smackdown and strategy. Optional hunts of powerful mini-bosses introduce an experience so alluring that it may distract you from the main story that, while dramatic, progresses more as a dogged fetch quest. Artifacts and temples seem excusatory for the purpose of traveling to various dungeons as more interesting political strife takes place elsewhere.

Occasionally, however, the two instances do cross paths and give off a wonderful intensity. The villainous Judges are the best of it, imperial officers clad in heavy ceremonial armor who are so want for power that good intentions quickly become grey, and then sinister. Their thick accents reverberate deeply beneath their steel helmets in an intimidating rage, yet in these voices an unmistakeable insecurity can be heard. The vocals are so shaking and the script so powerful, it is sometimes a wonder how this could possibly be a Final Fantasy game. And then Vaan speaks up, and you remember that it very much is.