I Am Setsuna: Wrong Answer

I might assume there’s a camp of people who were both invigorated and disappointed by the first major ‘decision’ of I Am Setusna. The scene itself I let stand still for some time. It hit me well: The piano accompaniment, the target’s claim to her inevitable death, the poise of the mercenary who’s found his mark. I didn’t want to swing the sword. But the gamer in me wanted to test the scenario’s limits. I flipped between the two options constantly. Could it be that I Am Setsuna would allow me to perform outright assassination? I knew that no, it likely wouldn’t. But perhaps it might, at the very least, alter the course of plot and character relationships. Too curious to care any longer, I swung. 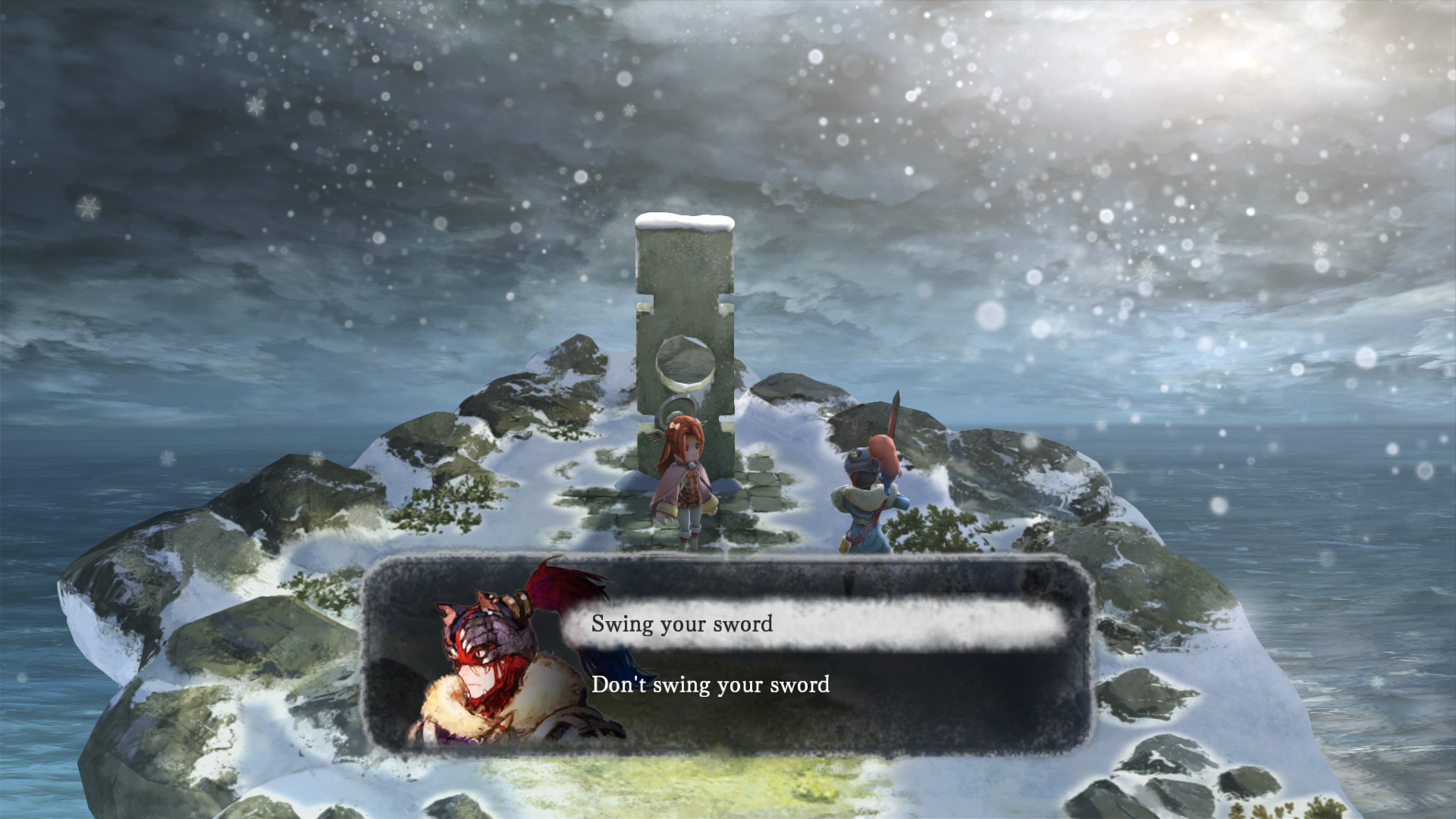 Thus the immediate lesson is learned about I Am Setsuna’s choice system: The game has its mind made up. Endir interrupts his swing by his own volition, establishing that he is not you, he is not me, and he is perhaps not as cold hearted as initially thought. Or maybe he thinks it inefficient to murder a girl who’s marching toward a sacrificial ritual anyway. At best this says that Endir is capable of reasoning, even if his acceptance of a hit job portrays a stark lack of the ethical kind. But it’s clear the pointy legged avatar has his own compass — if fractured — and so the player’s will is a ballot not counted. But if options presented to the player have no effect on the game in front of them, then why press forward? Are the developers at Tokyo RPG trying to emulate something they don’t understand the value of?

This somewhat soured my playthrough of I Am Setsuna. I saw it as a lack of creativity. From first swing or no swing, to dozens of dialogue prompts throughout the story that request Endir’s own opinions, I Am Setsuna dismisses player input. Its choice system — if you could call it that — does not accept ‘wrong answers.’ In fact, the primary purposes of other party members is essentially to shoot Endir down. If they ask what I’d like to do, they respond to my suggestion with “we’ll do this instead.” But if I say the ‘right’ thing, the nice or heartwarming answer, I often receive “Wow Endir…That’s not like you at all!” Furthermore, despite the party disrespecting or patronizing Endir’s leadership at every dialogue prompt in this manner, they continue to prod him for guidance and protection. It’s all rather bizarre. 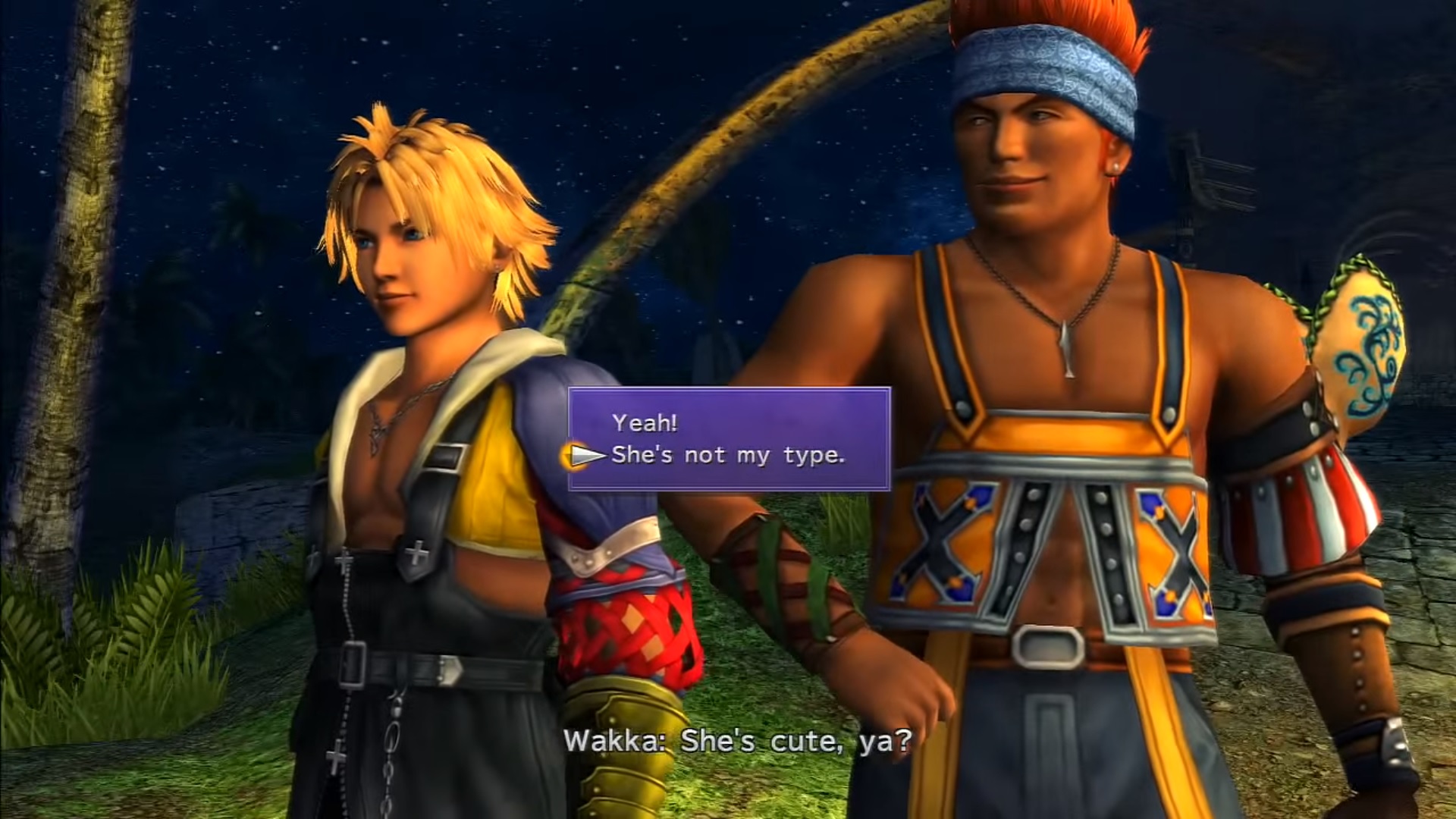 But this isn’t actually an uncommon reality in games that feature choice. In all of the obvious comparisons to ‘traditional’ JRPGs, I Am Setsuna’s decision making is faithful to a familiar style. It’s the kind that’s purpose is to get a rise out of other characters, create humour, or project yourself. For example, in Squaresoft’s Final Fantasy X, the game gives a rare choice prompt during a scene around the bonfire on Besaid Island. The protagonist first meets his love interest and he’s asked if she’s cute or not. It’s implicitly understood the player is not deciding Tidus’s taste in women, but projecting their own interest or non-interest in the girl, and expecting to pry some information or get some humor from Wakka in return. To I Am Setsuna’s credit, a number of its dialogue options are of this nature, where certain selections are smartass remarks meant to inject absurdity. Likewise, FFX’s rare choice prompt is an opportunity for meaningless fun (or if you’re as paranoid as me, you may see it as a possible trigger to get an ultimate weapon and rush to some message board to be sure.) 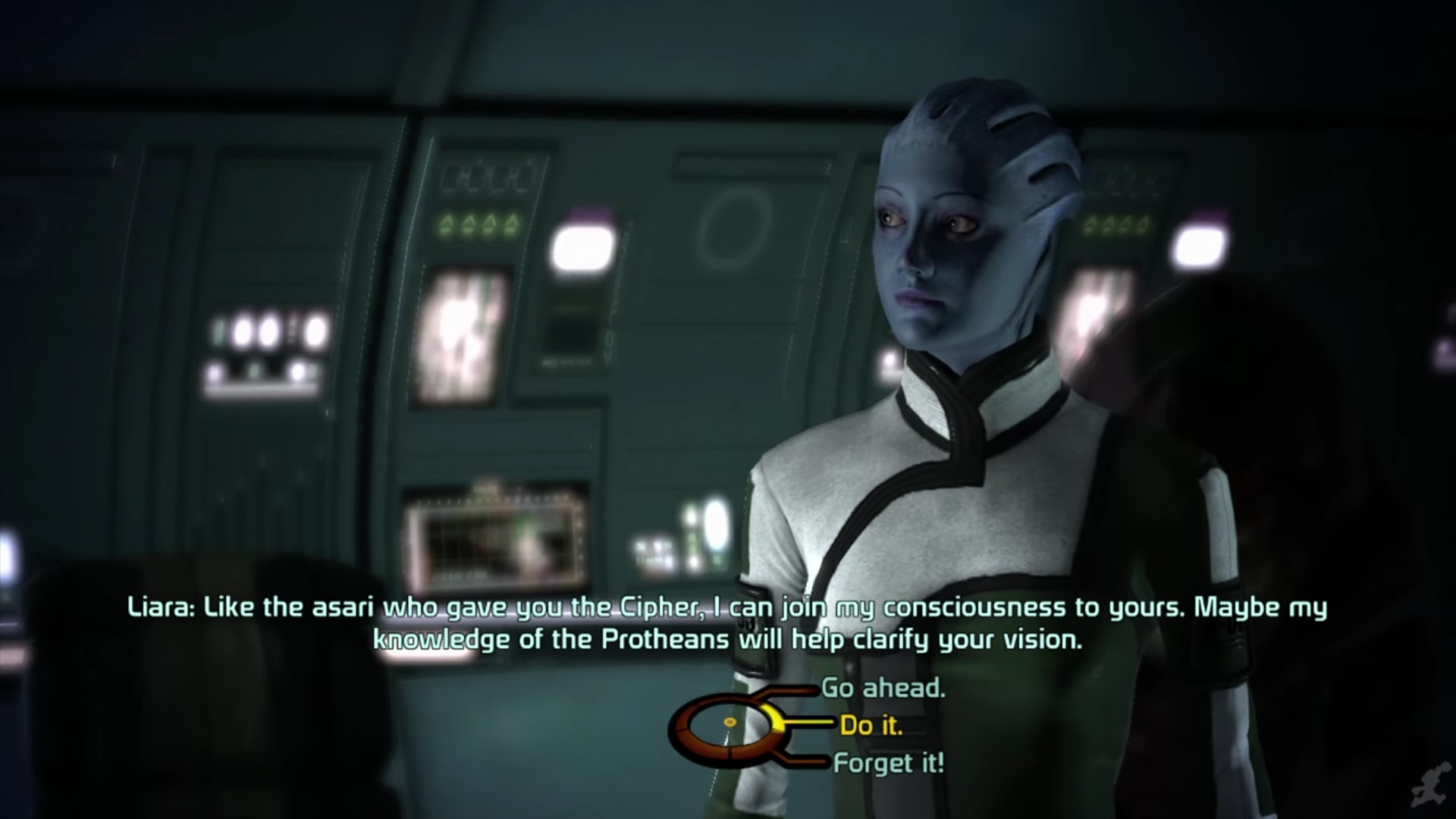 Looking westward, in the realm of RPGs that more commonly advertise branching capabilities in storytelling, we still see this linearity in a different form. I’m strongly reminded of Mass Effect, in particular, an experience founded upon its dialogue wheel. Although entertainment is found in naughty or nice scenarios where Commander Shepard can punch a pesky news reporter or even decide which party members live and die, player choice is inconsequential to the outcome of the main story. Shepard allows you to pick and choose when it matters least, then suddenly forcing outcomes that play nice with the plot. Whether it’s jumping in front of dangerous psycho energy to save a comrade at the start of the game, or when the the dialogue wheel sneaks in three different ways to say ‘Yes’ to an alien who offers to mess with your brain, Mass Effect is really just one story with occasional opportunities to be rude or polite.

Nonetheless, you might say these games got away with it more easily than I Am Setsuna manages to. They had real entertainment factor. The branches didn’t have to be far reaching to make a memorable experience. Calling Yuna cute or being a jerk to an Asari alien holds its own amusement, even if it’s a dupe all the same. The major difference with I Am Setsuna, then, is its boldness. It presents binary decisions that make no attempt at disguising their result as anything but meaningless. If Endir was asked to choose a direction and said “Take the left path,” his party members would say “Hm, let’s go right.” It’s like asking someone where they want to eat and subsequently tearing down their recommendation.

So brazen is I Am Setsuna with refuting Endir that I thought maybe their was some grand plot twist regarding it. Maybe the binary decisions represent a tortured mind. Endir may not be human. A monster torn between complex emotions! Like the monster met by the party in the caves behind Royburg. The creature showed human intelligence, but it struggled to comprehend death, forgiveness, or trust. Maybe Endir is just a high functioning example of this. His mask does look freakish.

I never got that plot twist. Instead, the choice mechanism grew even more tiresome for its frequency. Say ridiculous thing. Get called ridiculous. Ponder a question of a party member in need. Get answer vetoed by Setsuna. If it were just small bits of non factor conversations, it would merely be annoying, but I Am Setsuna’s handling of choice culminates into dramatic confrontation with starkly little consequence. See the screenshot below of Endir presented with a decision to send Setsuna to her death out of his own lack of confidence, or gamble a fight to save the world. 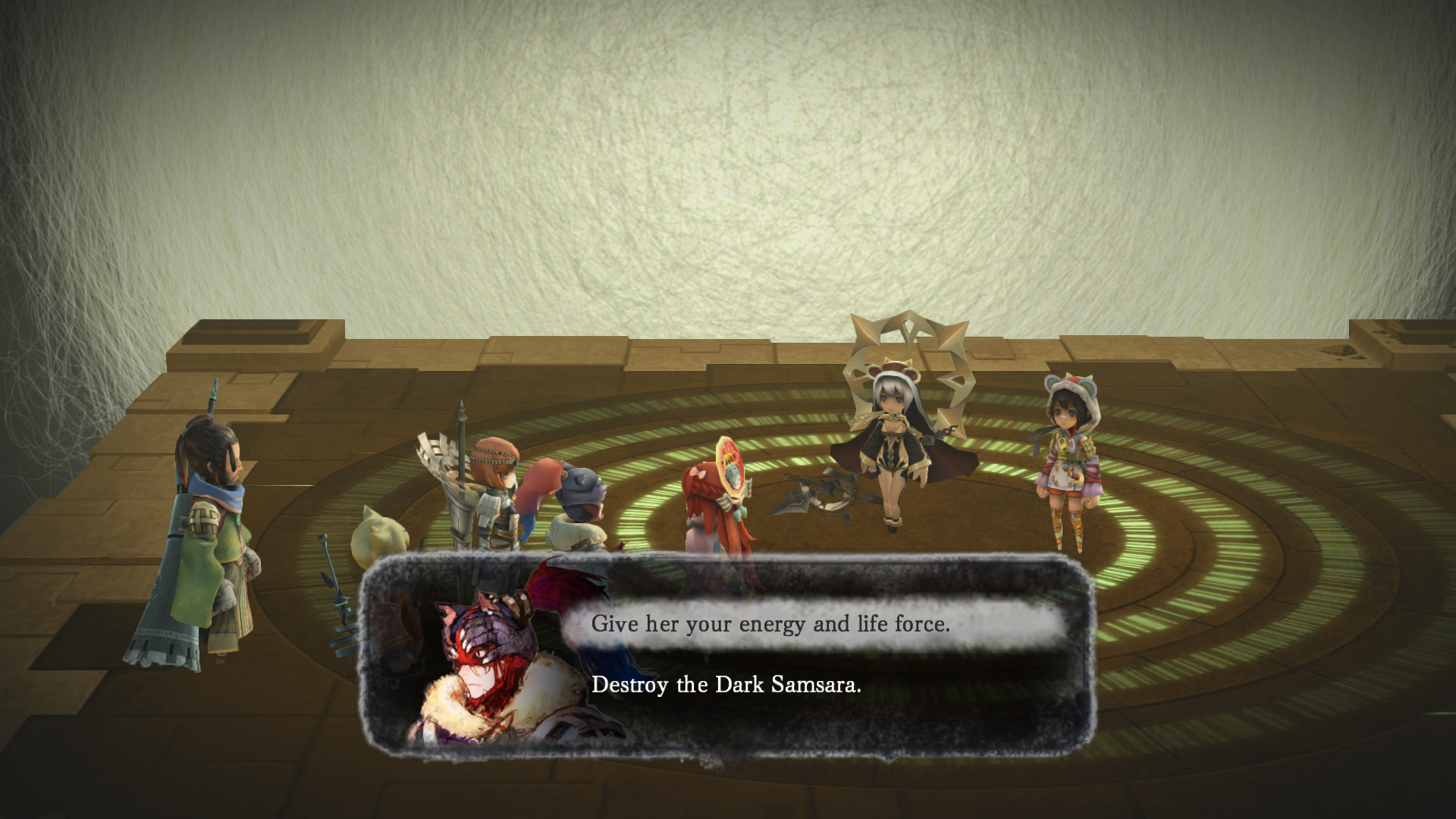 By this time I’m fed up and know the system too well to even be phased by the audacity shown here. I don’t even raise an eyebrow at the ultimatum because I Am Setsuna has trained the player to expect no penalty. If I choose the wrong answer, the party will proceed a pre-decided course of action anyway, and that’s exactly what happens. But it’s at this peak of bored frustration that I Am Setsuna inches toward the scene that ties its habit of hammering wrong choices to a greater theme. And no, it isn’t entirely vindicated for it, but it proves to be a powerful part of a flawed game, and worth some admiration.

First there is some preparation, a hint from the developers that Endir has grown as a character. The implication comes standing at the foot of the final boss. Unlike ever before, Endir gets three choices of dialogue instead of two, and for the first time they are not opposed to each other, nor are any rooted in the cold logic of a mercenary. All three options are shouts of encouragement, revealing that Endir — the player, too, the developer hopes — has changed from vulture to protector, from enemy to a friend of Setsuna. For the first time Endir is all in, where no selection  to say otherwise is the proof.

Dish the damage needed and Endir and Setsuna eventually find themselves at the cliffside identical to the opening dilemma, where I first swung my sword at an innocent girl merely to challenge a game’s ambition. Containing the soul that threatens the world’s safety, Setsuna requests Endir to destroy her while the darkness is within her body. The scene is recreated: Swing the sword or do not. Same decision as before, but now inverted with new feelings and an orange sky. There is warmth between Endir and Setsuna this time, and the piano is rolling in again. The sound of metal rings out as Endir unsheathes his sword and sets his shoulders, and I’m flipping between two options again. Not out of curiosity, but as a struggle to accept what I Am Setsuna has preached since the start. That choice doesn’t matter. That, from the start, this was the only outcome that was ever possible. Swing or do not swing, Setsuna perishes all the same. 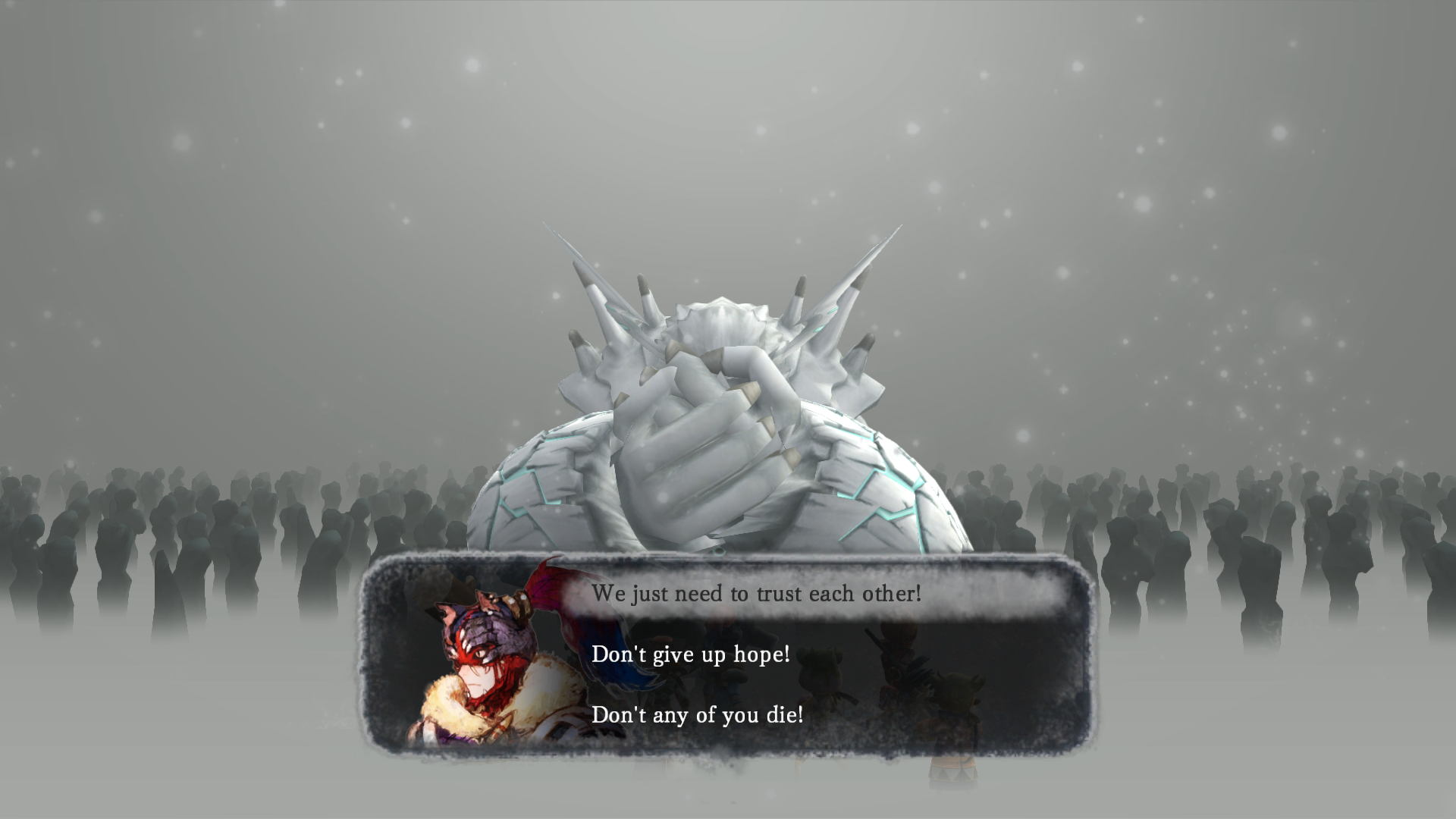 It’s hard hitting. Though I concede this could all be the effects of great piano music, the more I think of the ending of I Am Setsuna, the more I respect its cleverness and its ability to convey sadness. “Poignant sorrow”, after all, was director Atsushi Hashimoto’s original goal. Of course, I don’t mean to say it excuses or redeems the shortcomings of an extremely awkward dialogue mechanism. Indeed, a million things probably could have been done better with I Am Setsuna. But the ending stands as a brilliant piece of scenario writing, and I take it as a lesson that there isn’t a textbook on how to do choices in video games. I Am Setsuna’s ending ‘decision’ had me pacing around the room, shocked by a system I vastly underestimated and in love with an idea. If Tokyo RPG sticks around for more projects, I hope to see more of such ideas albeit executed more cleanly. And if they choose not to make another game, well, that’s not a correct answer.