The Betrayal of Trust in Baten Kaitos

A Bond to be Broken in Baten Kaitos

Devote 50 hours to a game and it becomes something more. In Baten Kaitos Eternal Wings and the Lost Ocean, it becomes a relationship. It’s a bond personified within the design itself via the concept of a ‘Guardian Spirit’, a fourth wall reference to you, the player.

A Guardian Spirit in the world of Baten Kaitos is described as a soul from another dimension. Occasionally, these souls will find fancy in an individual in another world and tether itself to them. It grants them power, courage, and companionship.

It’s a vague concept. The characters of Baten Kaitos don’t fully understand why or how any of it really works, either. Few can hear or sense your presence. Kalas might as well be seen talking to himself.

Nonetheless, Baten Kaitos begins with the player making his or her introduction as this spirit. Instead of naming the main protagonist, you enter the name for yourself.

The World of Baten Kaitos Exists With or Without You

Kalas, the one winged human and actual main protagonist, welcomes you into himself. He likes to call you his partner, and turns to the screen to address you at multiple points in the story. “Hey [player name], what do you think we should do?” Not that your answer matters.

Dialogue choices with no consequences are typically an annoying trope. But in Baten Kaitos Eternal Wings and the Lost Ocean, your answers not carrying weight reinforce the separation between the player and Kalas. He is his own person. You’re just sort of there watching him. 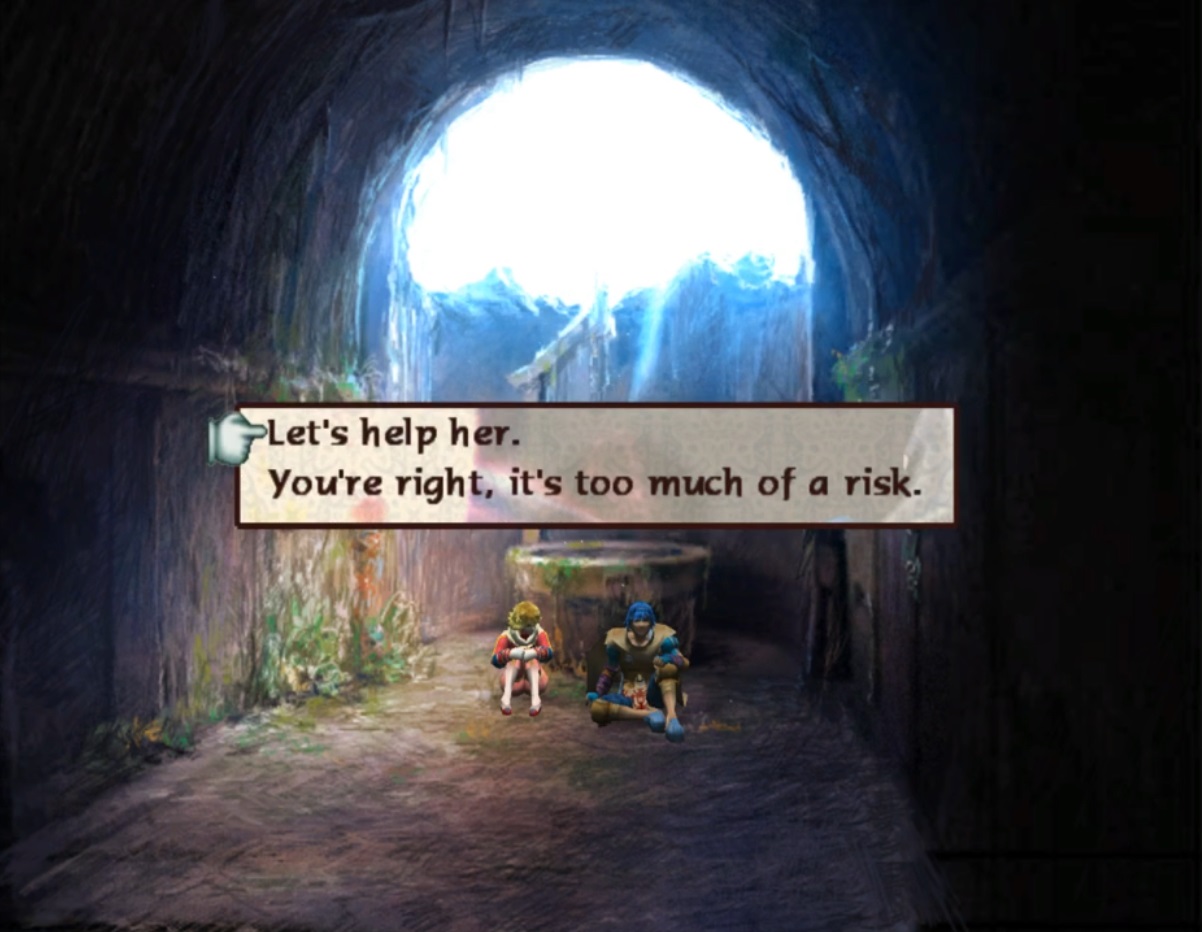 Kalas asks the Guardian Spirit for direction but in reality he already has his mind made up.

This takes some getting used to. Plenty of games implement player presence as part of their themes or story telling. Maybe to place guilt onto your actions, or to tie your personality to dialogue decisions. But Baten Kaitos does so without acknowledging your ability to control.

Put simply, the world of Baten Kaitos and the character Kalas go about their business despite you. And it is this rule set that constitutes the story’s shocking plot twist in its middle portion. It’s a striking element of game design to this day, a long con that’s hard to see coming.

It originates in the fact that Kalas’s prime motivator is vengeance. He wants to kill an imperial commander named Giacomo, the man who murdered his adoptive grandfather and brother. That Kalas is travelling with Xelha, a girl out to prevent an evil god’s awakening, is purely out of convenience since Giacomo happens to be part of the scheme.

From the onset of Baten Kaitos, the goals of Kalas are at odds with Xelha’s. But as more party members join the adventure, this fact is forgotten or its presence weakened in the player’s state of mind. By mid game Baten Kaitos is in ‘save the universe’ mode, full swing. 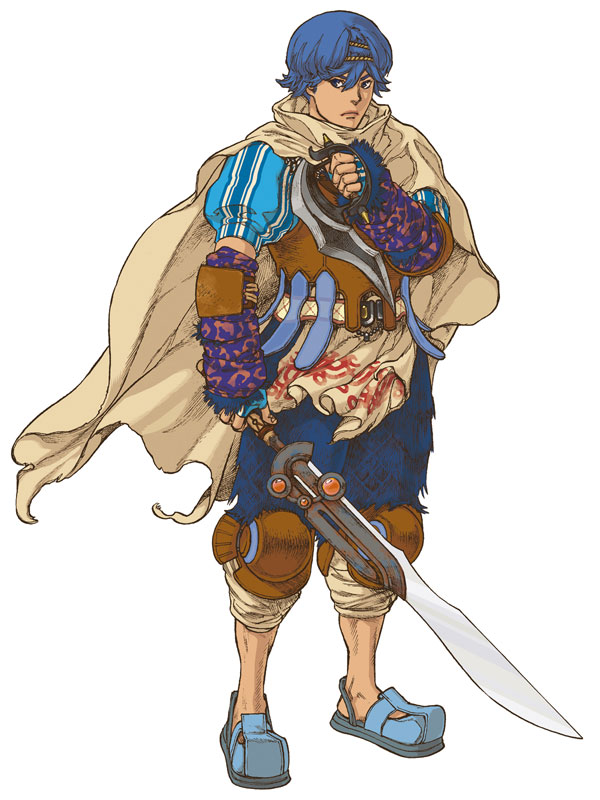 As Kalas and crew hop to and from the floating island civilizations, it’s assumed they’ve become a common JRPG troupe of friends. At this point Giacomo is in fact defeated (at least the first time), so Kalas still sticking around must be out of newfound kindness. Why else would he still be here?

Then, in their collecting of the remnants of the evil god on the floating continent of Mira, Kalas loses one of the Magnus pieces. They trace their steps in case he might have dropped it in one of Mira’s wonky dungeons, but eventually conclude it was stolen. The thief, they suspect, is within their own party.

In this segment, Baten Kaitos expertly abuses the player’s false idea of themselves as the main protagonist. Because in most videogames, that’s just how it works. However, in forgetting that you’re just a Guardian Spirit, an outside visitor, it’s all too easy to begin suspecting Mizuti, Savyna, Gibari, Xelha or Lyude as possible culprits.

Kalas is out of the question. That’s my character.

The Early ‘Game Over’ in Baten Kaitos

It’s only when the betrayal occurs that Baten Kaitos cements the difference between your world and its own. Kalas reveals that he has been working with the game’s villain to pursue the evil god’s power and harness it himself. He removes himself from the party and exorcises you, the Guardian Spirit, from his body. 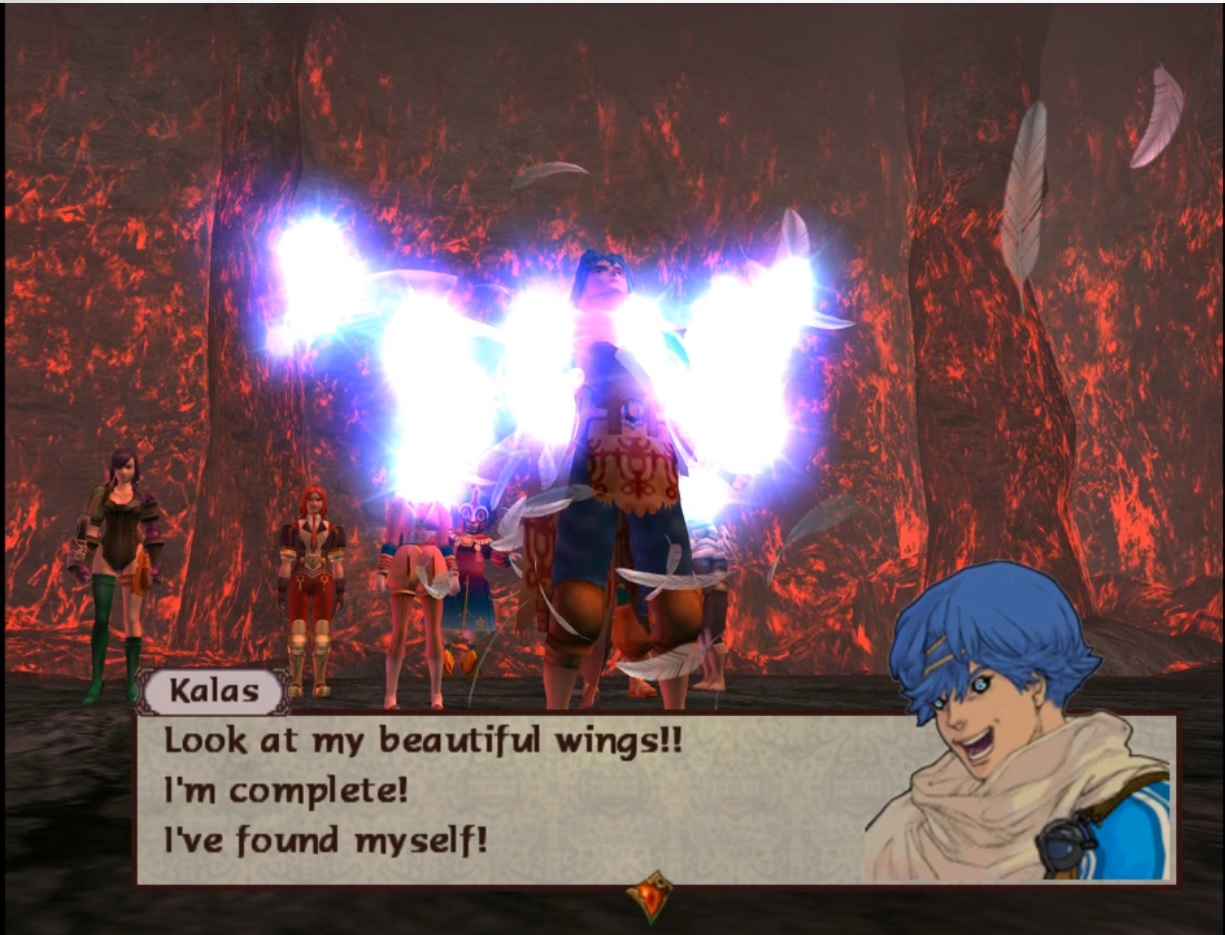 Not only is this a betrayal of the party but also that of the player’s mutual relationship with videogames in general. That sort of thing just isn’t supposed to happen. Kalas uses the Guardian Spirit’s power to protect himself as he takes in the evil god’s presence and sprouts himself a pair of beautiful wings. He casts his old makeshift wing and the player aside as used tools with no further purpose.

Part of what makes this scene so powerful — aside from the legendary voice performance — is how personal Kalas’s words are to the player. “Nobody needs you anymore… Your game is over. Go back to your world now.”

Kalas directly referencing ‘your game’ isn’t an accident. Once he removes the Guardian Spirit from himself, the scene comes to an end and Baten Kaitos, the game itself, blacks out. This transition to blackness is done in the style of a TV screen shutting off into static. You’ve been tuned out.

The betrayal is impactful and memorable not just for being a ‘twist’ but also for its implications. It reminds the Guardian Spirit of both it and Kalas’s agency. You popped in Baten Kaitos Eternal Wings and the Lost Ocean out of whimsy. Something to try. An enjoyable escape. Kalas on the other hand is a boy born but with one wing and massive feelings of inferiority. Nothing about you two is inherently compatible.

The serendipity of your random occurrence as a Guardian Spirit is emphasized upon throughout Baten Kaitos. Particularly towards the end when Melodia reflects on the fact that she didn’t choose a Guardian Spirit for Kalas, it just happened to reach out to him.

This breathes some sense of reality into the world of Baten Kaitos. That when the Guardian Spirit stops playing it, the game’s universe has established itself as independent and as if it’s still existing. And that other spirits — other players — are stepping into game worlds at every moment. The characters, too, benefit from this newfound sense of realness. 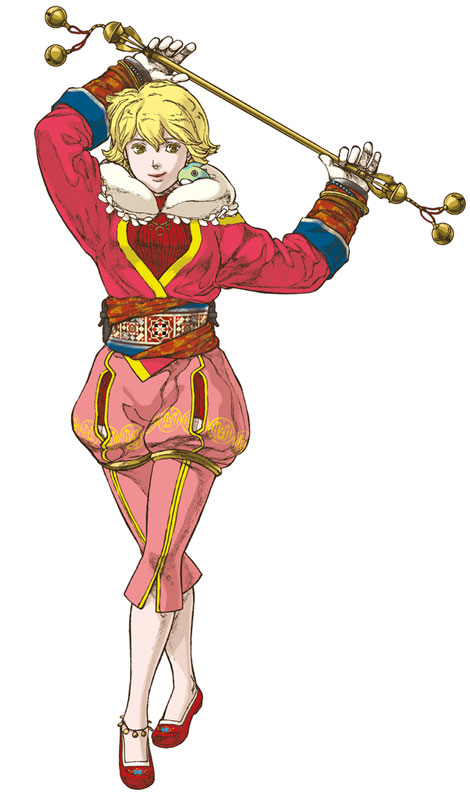 When the game resumes itself, it’s only because you’ve found another host: Xelha. She accepts your presence just as Kalas did before, and now you are her Guardian Spirit. Still just an observer and not privy to the character’s true intentions, but now the experience seems different.

Xelha remarks how your presence gives her courage and warmth. Now that you’re here, she feels like she can go on despite Kalas’s actions. In this new relationship, Baten Kaitos can now be enjoyed differently going forward. You’re a friend to the people in this game, and it’s a nice feeling.

For example, the only tangible in-game effect the Guardian Spirit has for Kalas or Xelha is a better chance at producing a special action card during combat. This advantage is completely negligible. In fact, there’s a fight where Giacomo creates interference between you and Kalas, and you’d hardly notice any difference in combat effectiveness.

Clumsy implementation aside, the Guardian Spirit concept in Baten Kaitos reminds gamers of an important quality of the interactive medium. That controlling a game is itself a building block to its story, characters, and of the fondest memories you create from it.

It’s why many Japanese RPGs are effective in story telling not thanks to excellent use of language, but due to their repetitiveness and ‘grind,’ so to speak. A party of characters lines up for battle, sprouts their wings and a jazzy battle track kicks into gear as the first hands are dealt. Over the course of 50 hours, these moments compound into how the characters and world are received by players. The shock of Kalas’s betrayal is proof of the medium’s effectiveness in this area.

A Farewell from Kalas to the Player of Baten Kaitos

The ending of Baten Kaitos Eternal Wings and the Lost Ocean is a powerful send off to the player himself. The world saved, the Guardian Spirit is no longer needed (or maybe Xelha and Kalas just want some privacy). The game’s entire cast lines up and gives the player a heartfelt thank you.

Before tuning you out for good, however, Kalas again gets on a personal level with the player. He essentially asks why you came to their world in the first place. He hopes that whatever you’re looking for, that you find it in your world. What exactly does Kalas mean here?

Perhaps that popping in a game like Baten Kaitos is, in the real world, a way to fill a gap somewhere. Temporarily at least. And then, like a lost soul, to float around and look for new stories to latch onto and see start to finish, and onto the next.

Xelha herself infers that those who attract Guardian Spirits are different. They “have lives fraught with sadness.” This drama attracting the players who seek new tragedies to overcome.

Or maybe Kalas’s question is implying that people who put 50 hours into a game like Baten Kaitos are mentally troubled. Either way, it was nice of him to ask.